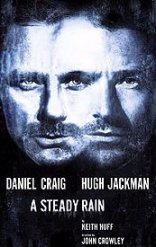 I was lucky enough to score a ticket to A Steady Rain, the two-hander starring Daniel Craig and Hugh Jackman on Broadway. It’s an impossible ticket to get (unless you want to pony up $376.50 for a “premium” seat. Rotten greedy bastards.)Cynical old me was ready for an evening of eye rolling and tut-tutting. The reviews were okay, but not glowing. I thought it was going to be an evening of movie star crap-ola. Well, guess what? It was great. Fuck the critics (as usual). I had a fine time. The attempted Chicago accents were a bit grating at first but I was pulled in on the strength of the story and flashes of raw emotion.

Jackman had the better, more showy role but Craig was fine, as well. They both have legitimate stage credentials so it was far from being a vanity project. I remember Kelsey Grammer playing, believe it or not, Macbeth on Broadway several years ago. Now, THAT was a vanity project. It closed after just 10 days.

When I mentioned that I was going to see A Steady Rain, several people told me to make sure to turn my cell phone off. They were referring to an incident whereby Hugh Jackman stopped the show to chastise someone in the audience whose cell phone went off. The clip is below. Hugh Jackman is a polite Aussie. Click on the second clip and listen to New York native Patty Lupone school Hugh on how it’s done.