I was passing through Grand Central Station at 6:45 in the morning and stumbled across a photo session in progress. The New York City K9 corps were having their portrait taken. The dogs were astonishingly well behaved. I’ll bet they can get real fierce real quick. These are cheap-o cell phone pics. 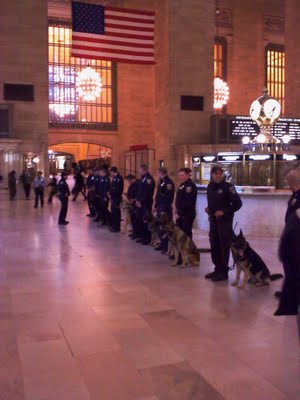 The nice officer on the end was shooting me a look so I pocketed my cell phone and moved on. 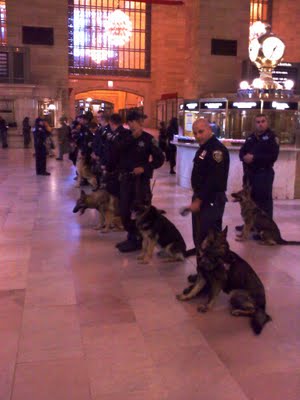 I called in “sick” yesterday (kak-kak. So sorry. kak. Can’t make it in.) and went on a job interview. I’m looking for a better life. It wouldn’t take much. The interview was in the morning and it went well. Afterwards, I went for a nice long run. Then I sat in a coffee shop and wrote some emails to friends and read the Times. In the evening I was able to have dinner with my family which is something that, thanks to Benevolent Dictators, Inc., hasn’t occurred for many, many months. Why can’t I live like that all the time? I don’t think it’s asking for too much.

Epilogue: Part of my last post was a rant directed at Eva Mendes for some idiotic comments she made while on a press junket for a movie. She takes herself a bit too seriously, in my estimation. Well, honey, let Brad Pitt school you. This is from a People Magazine article that ran a few months ago. He was asked about the difficulties of being an actor.

It’s so tough being an actor. Sometimes they bring you coffee and sometimes it’s cold. And sometimes you don’t have a chair to sit on.

THAT’S how you do it. Class dismissed.