This week, this Calvin Klein billboard was erected in Times Square on the corner of 42nd Street and Broadway:

Here, in one of the busiest intersections on the planet, we have two “models.” The girl, who is so emaciated that she’s repugnant to look at (she looks like a spider who’s missing half her legs), is tugging at this gay guy’s shorts, presumably, to get to his cock. Is it my hyperactive imagination or is she suppose to be jerking him off high above Times Square? Lookout below! 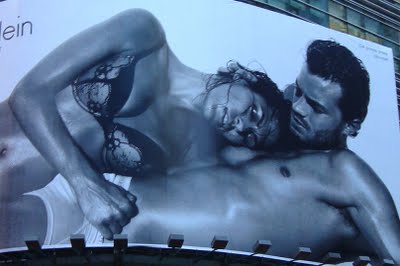 The problem I’m having is that this is the peak of the holiday season. The area surrounding Times Square and the Bryant Park skating rink, which is just a block away, is choked with families who are visiting the city. Tell me if I’m being a tool here, but there are little kids everywhere who I don’t think should be exposed to this stuff.

Isn’t there some kind of faceless city board who approves ads in public spaces? Am I finally too old for the city?

14 thoughts on “Sex sells. Am I just being prudish?”