Whilst in Cleveland I took The Daughters to the Cleveland Museum of Art to see the Paul Gauguin: Paris: 1889 exhibit. It was fortuitous that we were in town for it because Cleveland is the only U.S. stop. After Clevo, it heads to the Van Gogh Museum in Amsterdam. What a coup for Cleveland!

The show recreates the exhibition that Gauguin organized on the grounds of the 1889 Exposition Universelle, which is now recognized as the first Symbolist exhibition in Paris. It included In The Waves, one of my favorite not-Polynesian Gauguin’s. 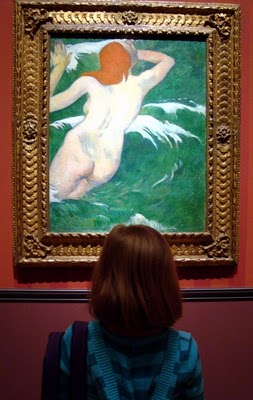 Were you aware that the Cleveland Museum of Art has one of the greatest art collections in the country? It’s true! It can easily hold it’s own against the big houses in New York. They have some spectacular Calder mobiles and sculptures. I love Calder. So did the kids.

One of my proudest moments so far as a parent occurred when we turned a corner and 8-Year Old Daughter casually said, “Look, Dad, there’s a Pollock.” My work is almost complete.

Here’s something to tuck away in case you visit a museum in the near future: 3-years old is WAY, WAY, WAY too young for an art museum. Their attention span just isn’t there yet and you’ll have to divide your time between worshiping the art and making sure she doesn’t climb on the Degas sculpture pedestal. Just so you know.

3-Year Old Daughter did stop long enough to admire the Red Grooms diorama of New York. This scene is the corner of Broadway and Canal Street. Click on this one! Red Grooms and Alexander Calder are the most kid-friendly artists you’ll find in any museum, anywhere.

3-Year Old Daughter got her first face-full of Monet’s water lilies. She was not impressed. Yet…

The museum also has a pretty impressive collection of medieval armor and weapons. 3-Year Old dared him to climb down off of that horse.