I saw The New Group’s production of Blood From a Stone. It’s billed as a dark comedy/drama about a dysfunctional family but let me tell you, it’s about 10 parts comedy to 90 parts drama. And “dysfunctional” is too gentle, too clinical a term, to describe the goings on. 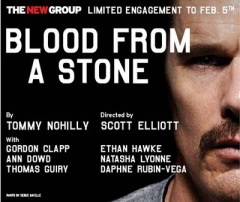 It’s in previews and the word on the street is that, at a bit over three hours, it runs too long and they’re trying to pare it down before opening night. I have no idea what people are complaining about. It was so well acted and so compelling that I didn’t look at my watch once. It’s down to about 2:45 and it makes me wonder what I missed.

Comparisons to the horrible family in Tracy Letts’ August: Osage County are inevitable but this sort of thing goes back to Tennessee Williams and even further than that. This family is vintage blue collar bankrupt, living in a house that is, quite literally, falling apart. It’s a different spin on an often-told story.

The entire cast is strong although as the insane ball of anger father, Gordon Clapp (of NYPD Blue) seemed like he was acting at times. Daphne Rubin-Vega (Rent original cast) has exactly one scene but it’s so sexually charged that it impacts the rest of the story. As the scene opens, she’s sans clothes but the lights are so dim that you don’t see any of her goodies, which I’m a little upset about.

But that goddamn Ethan Hawke. That son-of-a-bitch is The Man. He was on stage for pretty much the entire 2:45 and he drove that bus just where it needed to go. He’s a master of dialog and reaction. During the intermission, I read the playbill and his credits include two Academy Award nominations, one of them as a writer. Also, he directed a play that was based on one of his two novels. Oh, and the ladies seem to like his look. (Edit: see first comment, for instance). Bastard. That guy makes me question my choices and feel like an underachiever.

21 thoughts on “That Goddamn Ethan Hawke”