Mural with blue brush stroke (1987) is a five-story high mural in the atrium of the Equitable Life Assurance building on 7th Avenue and 53rd Street by benday dot master Roy Lichtenstein. I had always tried to get a photo of it but pictures are not permitted. The cracker jack lobby security guards are quick to jump on anyone who pulls a camera out of their bag.

I just got a 3G iPhone and the Facetime feature includes a forward facing camera. So by pretending to send a text message, I was able to take a pic over my shoulder. The work is a nice piece but this photo looks kind of washed out. The colors are more vivid in person. I haven’t mastered my iPhone’s camera functionality yet.

Now that I have an iPhone I feel like I’ve been given a seat at the cool kid’s table in the cafeteria. The Facetime feature is kind of useless to me since I don’t know anyone else with a 3G iPhone. I resisted the iPhone for years but now that I have one I kind of see what the fuss is all about. 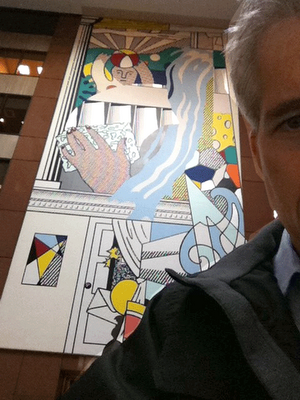 I was out for lunch eating my ham sandwich and saw this homeless woman acting in a most peculiar way. 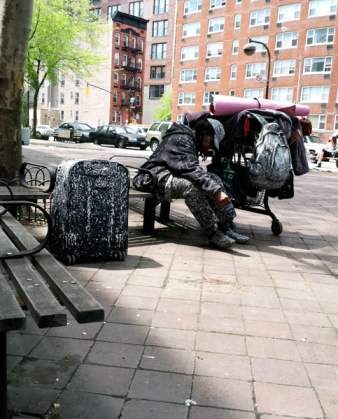 Upon closer examination, I saw that she was painting. She had a gallon can of what looked like white house paint and a small, small, model paint brush. She would dip the tip into the can of paint and make very deliberate and delicate squiggles of white paint on her shoe. She had already painted her backpack, luggage, pants and hat. (Click for detail.)

This pic doesn’t do it justice. It makes it look like the suitcase is covered with pigeon droppings. But the work is actually quite detailed and delicate. I would hazard to say that the effort and number of hours spent on her project might rival that of Mr. Lichtenstein’s mural above. 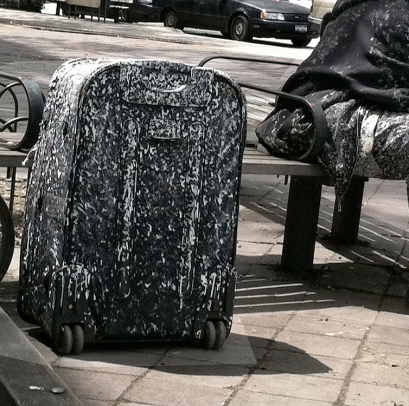 It made me wonder how the arbitrators of art—the ones who hold the purse strings and dole out commissions—get their position. And what separates one artist, who has his work displayed in corporate atriums and is a multimillionaire, from another artist who has the same burning need for artistic expression but is homeless. To me, these things have more to do with chance and circumstance than the quality of the work itself. I’ve seen works on display at MoMA that didn’t have the same depth of thought as that suitcase.

23 thoughts on “Of high art and low art”