The job market is steadily improving here in New York and I’ve been on a mad tear interviewing in an effort to shed this consultant skin and get a position that will provide my family and I with fat, juicy benefits. I have some freelance friends who would never trade-in their independence. They don’t want to be beholden to The Man, man, but that ain’t me. The Man has afforded me a pretty decent standard of living and I’ll sign on the dotted line with blood as soon as I find a good match.

To that end, I called in sick last Tuesday (kack-kack) and interviewed at Large Orange Institution inside the elegant Helmsley Building, just outside of Grand Central Station. Originally built in 1929 by the New York Central Railroad Company and known as the New York Central Building, it was renamed in 1988 by a wretched, old gargoyle named Leona Helmsley.

I interviewed with two different Big Shots. After sufficiently charming and dispensing with Big Shot #1, and while waiting for Big Shot #2 to show up, I snapped this photo from the conference room window. This is looking north up Park Avenue. I like this perspective because everything comes to a sharp point. 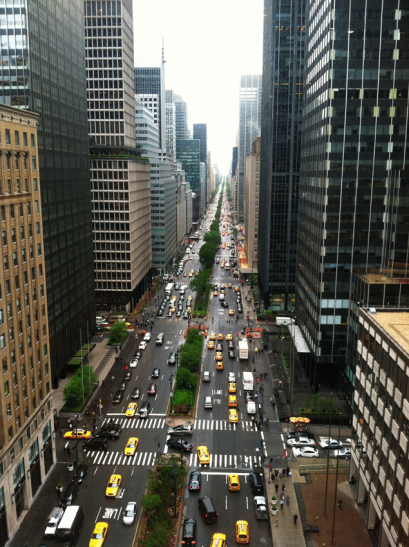 The third building on the left—the one that juts out a bit—is Lever House. Directly across the street is the Seagram Building. Both are considered influential architectural milestones and if a certain JZ wants to explain why in the comments section he should feel free to do so. The building one block north of the Seagram Building with the gold glow is the Waldorf-Astoria. This is the high-rent district.

Here’s the elevator I took up to my interview. It’s so Olde World New York. It’s red painted wood with an ornate metal façade. 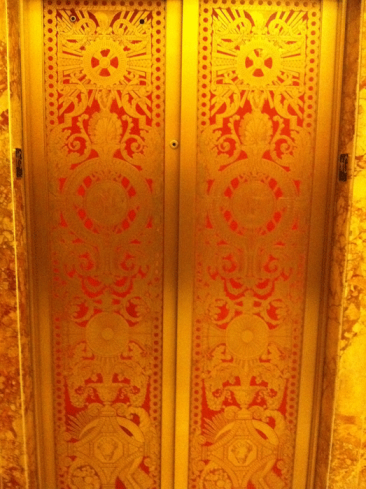 At the center of the abstract design at eye level is an interlocking “NYC” in front of two intertwined serpents. (Click on this one.) 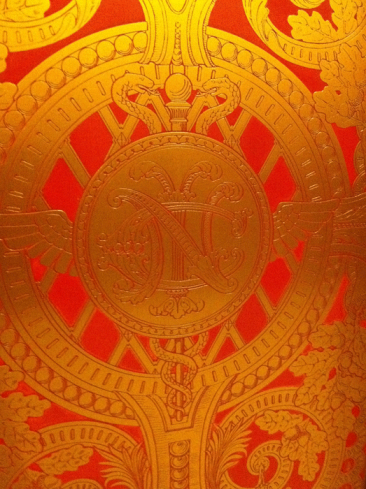 The elevators have an over-the-top Louis XIV interior with a sky mural on the ceiling. It’s flea market elegant. 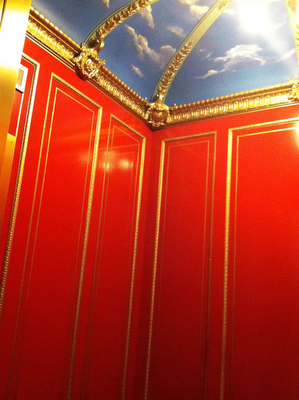 The interviews went SO well, and my skill set is so suited to their needs, that before the day was over I got a call from the headhunter telling me they’re interested. It would, however, be a three-month contract-to-hire. Nobody hires directly on staff anymore! Here we go again.

Boy, did I need a stiff drink after all that. It feels strange to drink at 3:00 in the afternoon, but when ya gotta, ya gotta. And I knew just the place.

I met CB, who is a writer and keeps very irregular hours, and Bob, who’s visiting from London, at the elegant Campbell Apartment inside Grand Central Station. It’s a little known, stately, watering hole tucked into the corner that looks out onto Vanderbilt Avenue. The drinks aren’t cheap but it’s an authentic New York place to have a libation.

The room was once the office of American financier John W. Campbell, who served on the New York Central’s Board of Directors. It was never actually an apartment. 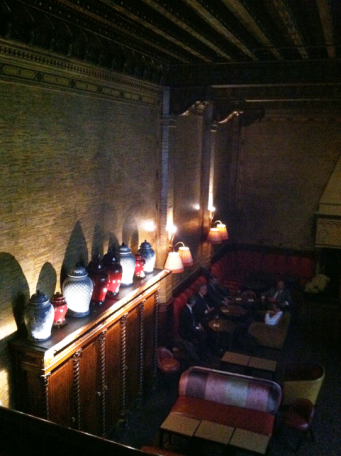 Light streams in and bathes the dark wood room with midday sun. There’s balcony seating (from where I took these shots) where you can observe all the busy little creatures chasing out their destinies. 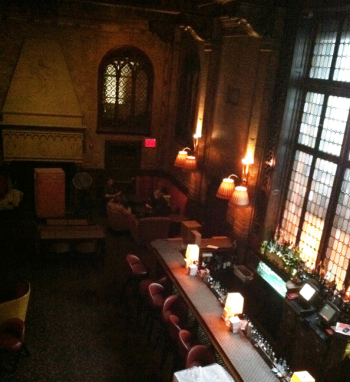 27 thoughts on “Conference Room With a View”