This weekend here in NY/NJ, everyone is focused on the 10th anniversary of 9/11. Is it like that where you live, or is it the third story in the newscast? It looks to me like the overwhelming display of grief is reopening a lot of old wounds. But it’s necessary. It’s right. The memorial. The special programing on TV. The visiting dignitaries. It has to be done.

Mrs. Wife and I lived in the East Village, less than a mile from the WTC. We both worked in midtown and had to walk home because the transit system was shut down. She was six months pregnant and was wearing terrible shoes that chewed her feet up. We had to stop so she could rest. The streets were choked with people trying to get home. It’s the only time I saw New Yorkers not complain about being inconvenienced. The air stunk like burning electricity for weeks after. South of Houston St., where we lived, was a militarized zone and we had to show ID and pass an armed checkpoint in order to get home. But we were alive and so were all of our friends, and that’s what mattered.

Architectural purists complained about the design of the World Trade Center but I loved it. I would ride my bike there all the time. If you stood with your back against one of the towers and looked up, an optical illusion made the tower seem as if it were bending over you. Even more so if you had a few good bong hits in you. They were astonishingly tall buildings. When flying home, those two towers were the first things I’d see. Hello, fellas! It’s good to be back!

Here’s a very good exhibit that’s up in Bryant Park for only two days. There are 2,819 empty chairs lined up across the lawn; one for each life lost in the attack. They’re all pointed south where the World Trade Center once stood. 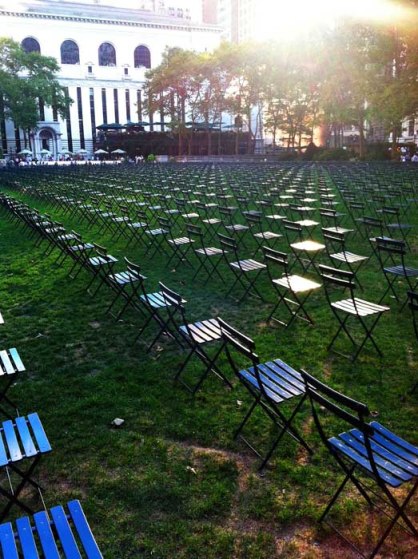 Our wedding anniversary is 9/11. Not THE 9/11. Today is 12 years. For the first few years after the attacks, I didn’t feel that being in a celebratory mood was respectful or right. I feel awful that some families were torn asunder and that my beautiful shining city has a big gash in it. But I’m reclaiming 9/11 to celebrate my marriage. 12 years is a pretty damn good run. A lot of folks don’t make it this far, but we did.

I lived in New York City, but 9/11 is so much more than a terrorist attack to me.

The annual 9/11 remembrance has given rise to a new sensation. In addition to the sad reflection and thoughtful meditation, 9/11 also serves as a reminder that autumn is upon us. It’s the opening weekend of the football season. The weather turns cool. The theater season gets underway. The kids are back in school. It’s time to swap out my summer clothes.

Also, it’s the final week that this place, a New Jersey summer institution, is open.

15 thoughts on “Two anniversaries. One dark. One light.”