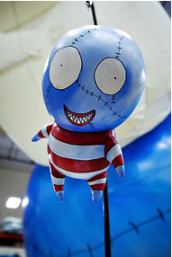 If you’re in the U.S., don’t forget to tune in to the Macy’s Thanksgiving Day parade this Thursday morning. It’s nothing more than a three-hour commercial, but I’ve been watching it ever since I was a little kid and wouldn’t miss it. I even attended once! Much like a trip to the Statue of Liberty and spending New Year’s Eve in Times Square, once is enough. I froze my ass off. A pal of mine liberated about a dozen tiny bottles of Harvey’s Bristol Cream from a British Airways flight and brought them in a paper bag. Drinking amongst all those happy families and little children felt kind of creepy, but drink we did.

I have no idea how THIS got approved but this first pic is one of the new balloons. It was designed by Tim Burton! Seeing “Macy’s Thanksgiving Day Parade” and “Tim Burton” appear in the same paragraph is something I never could have predicted. The character is B. Boy. According to Mr. Burton:

B. was created, Frankenstein’s monster-style, from the leftover balloons used in children’s parties at the Great Ormond Street Hospital in London. Forbidden from playing with other children because of his jagged teeth and crazy-quilt stitching, B. retreated to a basement lair, where he obsesses over Albert Lamorisse’s film “The Red Balloon” and dreams that he, too, will be able to fly someday.

Fantastic. This may portend a general turn to weirdness, as last years’ parade debuted Kaikai and Kiki, balloons created by Takashi Murakami.

Surprisingly, NONE of these new balloons exist to promote a product. I guess you can classify them solely as artistic endeavors. It’s enough to give you hope. Here’s how Mr. Murakami dressed last year to march alongside Kaikai and Kiki. I’m hoping that Mr. Burton dons an appropriate outfit to march alongside B. Boy.