I was called into my manager’s office. Meetings like this feel like a walk in the graveyard. In the past few years, meetings of this ilk usually involved the expiration of a consulting contract or, in two cases, being laid off because of attrition (a pretty word for an ugly thing). I couldn’t understand why she needed to see me. My current contract is a roll-over (meaning there’s no hard expiration date), we’re short handed (especially since my colleague went mad) and I’ve been doing some of my best work ever for this place.

I sat down and it started the way it always starts: “I’m sorry, but…”

She’s sorry but although she’s been fighting with human resources for months, she simply cannot hire me on staff. The bean counters won’t allow it. The type of work I do, graphic design, is considered back-office. It’s work that COSTS the company money. In the current economic climate, they can only hire on people who MAKE money for the firm. (In investment banking parlance, “rainmakers.”) Sadly, this appears to be the new normal.

However. Although she can’t hire me, she likes having me around. She doesn’t want me to leave, so she performed a miracle. She got blood from a stone. To entice me to stay, they’ve increased my consulting fee a whopping 25%. That’s a significant jump for someone in my income bracket.

I know it’s gauche to discuss a salary increase. You don’t have to tell me. And I’m not fishing for congrats in my comments section. But for years, I’ve been posting about all the horrific things that have happened to my family and I during this recession. I feel somewhat at liberty to do a bit of boasting now that something nice has finally occurred.

*     *     *
I stumbled across this beauty during an early-morning walk through Times Square. I chatted-up the driver and he said it was being delivered to the Museum of the City of New York. He mentioned the name of the sculptor. It was someone I’d heard of before, but I can’t remember it now. Can you tell what this sculpture is a reenactment of? If you ask me, they should leave them entombed in their cloth and plastic wrap embrace. It’s far more dramatic. 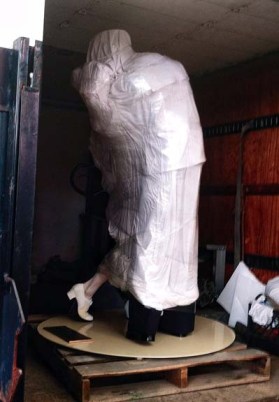 10-Year Old Daughter played on a community traveling basketball team last winter/spring. She wasn’t the best player, but she had a lot of fun participating. I think it was more of a social outlet for her. A few of the girls on her team were extraordinarily talented. So much so, that they won the regional championship.

They recently completed two-day tryouts for the coming season and because her team walked away with trophies and had their pictures in the local paper, the turnout was extra heavy. Everyone wants to jump on board an already-proven winner. It’s  much easier that way.

We got the results yesterday and Daughter didn’t make the team. She’s not a bad player, but much superior players came out of the woodwork to join. Her best friend on the team from last year made the cut. Do you know the first thing she did? She called her friend to congratulated her. That’s an evolved level of grace under disappointment that I, myself, have yet to achieve. My heart is ripped asunder that she wasn’t picked. Growing up, I was never picked for anything, so I treated myself to a lovely flashback. (It’s called “projecting,” for all you armchair psychologists.) Frankly, I think she’s over it already. I’ll try to keep my senses and not say anything to the coach if I bump into him in the frozen food section. I’ll try to learn how to handle a setback from my daughter’s example. What a champ.

Here are the latest box scores:

A man visiting the Bronx Zoo jumped into the tiger’s den. He had a passion for cats and was motivated “to be one with the tiger.” Bachuta, an 11-year-old male Siberian tiger weighing 400 pounds, welcomed him by giving him a broken pelvis, broken right shoulder, broken rib, a collapsed lung, a broken right ankle and puncture wounds on his arms, legs and shoulder.

The man’s Facebook page is filled with tributes to nature and images of tigers and other wild animals. “Love the animals. Don’t trouble it, don’t harass them, don’t deprive them of their happiness.”

A protestor in Lahore, Pakistan, died from inhaling fumes from the American flag he ignited.

29 thoughts on ““Can you step into my office for a minute?””