In addition to the post title, Karen Russell’s debut novel Swamplandia! is:

Exile on Pain Street:
So boring I don’t know how I’m ever going to finish this thing. I’m on page 278 of 397 and each turn of the leaf is like a slog through a vat of waist-high gelatin. I’m not invested in any of the characters. They could have all been eaten by alligators by page 50 for all I care. I don’t mind heavy drama, but the novel’s unrelenting dreariness is wearing me down. What, in God’s name, are all these reviewers and the Pulitzer committee talking about?! I am completely out of synch with the litterari. If I ever get through this, I’m going to reread A Clockwork Orange to restore my faith in the novel as an art form.

Daughter the Second. Six years old. I predict she will annihilate the hearts of many men without regret, starting with mine. I hope you’re looking at this on a high resolution screen. As with most of my good shots, this was completely accidental. I snapped this in a booth at a diner. The light source on the left is a window. I didn’t do any retouching in Photoshop. That’s the raw shot.

A pretty, young Chinese girl walks onto the downtown R train with her gigantic Plaster of Paris rat. The reaction from the other passengers? Compete and utter indifference. Of course! 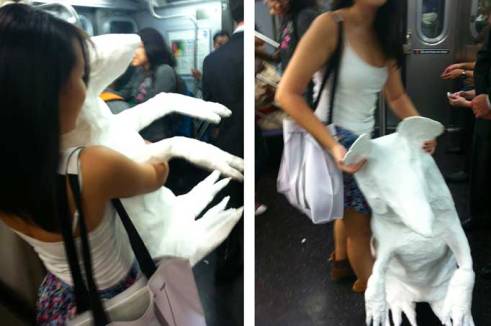 If I were a wizard for one day, I would conjure an irrevocable metaphysical law whereby if you dialed a number on your mobile phone while behind the wheel, it would instantaneously superheat to the temperature of molten lava. If you tapped out a text message while driving, the phone would detonate, taking your hand with it.

Ooh! That was a little dark, wasn’t it? But it’s an epidemic out here in Stupidville, U.S.A. Another wreck this past weekend. Is it as big a problem in other countries?

26 thoughts on “A Pulitzer Prize Finalist”