I had a half-finished post about an unexpected evening of drunkenness, noteworthy because of its rarity. I’m a lousy drinker. Alcohol has an almost poisonous effect on me. Then I read a post from a guy who just celebrated his third year of sobriety. I meditated on the dichotomy between these two conditions.

I met a friend for an after-work drink at Wolfgang’s Steakhouse on Park Avenue. I drank two tumblers of Maker’s Mark on the rocks. When I left I was numb from the waist down and couldn’t feel my feet touch the sidewalk. It was just two lousy drinks but liquor has never been my friend. Girls I dated always drank me under the table. When you’ve got a hot date, all you want to hear is an alcohol-fueled “take me” whispered in your ear. More often than not, what I heard was an incredulous, “Are you drunk already?!” So embarrassing!

I left the restaurant and had to take a bus back to New Jersey. I somehow made it to Port Authority and spent the next 1:15 in armageddon. My guts were twisted in a tight knot. I have a sheath for my umbrella so that if it’s wet, the contents of my travel bag stay dry. I held it in my hand the entire ride home to catch my sick (which, thankfully, never happened). I plugged in my ear buds, closed my eyes and listened to Vaughn Williams’ The Lark Ascending over and over to try and calm down. When I got home I collapsed on the futon in our home office. Awful.

I laid there in a fetal position praying for death’s merciful kiss and wondered how in the world anyone could possibly become addicted to alcohol. As it is, I’m ruined for Maker’s Mark. I’ll probably throw-up if I ever smell it again. I can only surmise that there’s a chemical reaction that occurs when you drink and that that reaction isn’t the same for everyone. I’m thankful that I have been afflicted with the lesser of two evils.

There’s a pretty good chance that my digestive system was torn asunder by this:

Do you know what that is? It’s BACON, bitches! For real. I ordered it off the appetizer menu while sitting at the bar. A gigantic, half inch thick, $5 slice of bacon. Sweet Mother of Baby Jesus it was scrumptious! But I wouldn’t recommend washing it down with a glass (x2) of Maker’s Mark. See that knife? Anytime a waiter puts a knife like that in front of you, you can rest assured that something great is about to happen.

I wasn’t so inebriated that I couldn’t stop and appreciate a decent Empire State Building/ 34th Street sunset. I was dazzled but I think it might have been the drink. 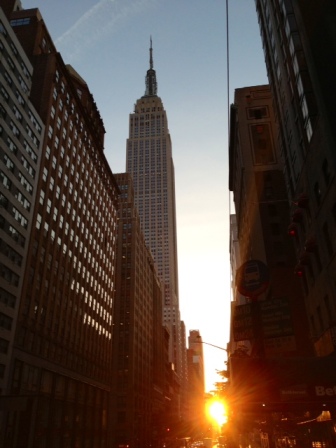