I’ve posted plenty of photos of The Daughters but I never show their faces. It feels intrusive and ill-advised. This is an open-architecture environment so I think some restraint is in order. [Per her request, I’ve never posted a photo of My Bride. You have to respect people’s wishes. Especially the ones you sleep next to every night.] Honestly, I don’t know what I’m so worried about. This isn’t a well-trafficked site. What harm can come of it?

Nevertheless, since I started blogging, I’ve allowed the indulgence of a full-frontal photo of The Daughters every year on my birthday. Why do I do this? What’s the difference between posting ONE revelatory photo and posting DOZENS? Why is it okay on one particular day of the year but verboten the other 364? It is, of course, ego-driven. A cry for attention. Look at my kids! Look at me! Today’s my birthday! It all seems (seems?!) kind of needy, don’t you think? But I make no apologies. A blog can be an artistic endeavor. A means of expression. But, let’s face it, it’s also a cry for attention and a sop to our egos.

Look at my kids! Look at me! Today’s my birthday! 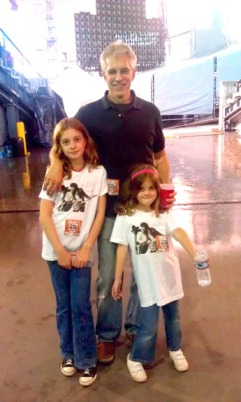 My age? I’m feeling very old this year. Very old. I will not reveal it. I never do. It’s a tic. Don’t judge me. Some people smoke. Others gossip. I’m hung-up on my age.

Speaking of daughters, I see that Kim and Kanye named their newborn North West. Celebrities shouldn’t be permitted to name their children. In honor of North’s birth, I quote the following lyrics from various Kanye West songs.

“We in the bathroom now, she get her back blew out
She can’t clean but I bet she got a vacuum mouth”

“Like my bitch when she pop champagne bottles
I tell you about them damn models
They can’t cook a lick but they’ll lick a dick and swallow!”

“Come and meet me in the bathroom stall
And show me why you deserve to have it all
Ball so hard
You know how many hot bitches I own?”

What do you think ol’ Kanye’ll do to the first man he overhears telling North she’s one of his second string bitches? Laugh at the irony? Or do you suppose that little fool has seen the light now that he has a daughter?

Hip-hop is a blight on the black community. They got rid of one ball and chain and replaced it with another. I guess I’m just an old, broken down white guy. One year older, to be specific.

31 thoughts on “The existential crisis of 8 July”