I’m a paper and ink guy. I’ll always read books and never own an e-reader. I know that e-readers are lightweight and convenient, but they lack tradition. Printed newspapers are dying, too. Luckily, I still have access to a number of different print publications. Most fortuitous of all, we here in New York still have a tabloid. Tabloids are awesome! God bless Rupert Murdoch’s New York Post.

Mr. Murdoch doesn’t seem to be overly concerned with journalistic excellence or accuracy. We have other outlets for that. News Corp has an ax to grind against liberals, and grind it does. Additionally, it provides cheap, visceral thrills. Nothing wakes your ass up quicker than a sensational headline or a ghastly photo first thing in the morning. My understanding is that London still has a few tabloids as well. Aren’t they great?!

I came up out of the subway last week, approached a newsstand and was met with this beauty:

Oh, yes they did, my lovelies. I can’t speak for its meaning globally, but here in the U.S., “pussy whipped” refers to a man relentlessly berated by his wife who doesn’t stand up for himself. He’s probably a liberal. And who knew there were still Cossack thugs in the world? I didn’t. Thank you, New York Post! Once the print editions cease, these wonderful, gaudy front pages will be no more. It’s sad.

You meet interesting people in The New York Post. Like Michelle Esquenazi, CEO of a successful bounty hunting operation on Staten Island. When asked the secret to her company’s phenomenal recovery rate, she said she sets “honey traps.”

“We send a hot piece of pussy to his door. Of course he’s going to open up the door for a nice piece of ass. It’s timeless. The thing about defendants is no matter who they are — they can come in white, black, green or purple polka dots. They’re all dumb,” she noted. “Every single last one of them is stupid.”

You’re not going to read about her in The Wall Street Journal. I want to have drinks with Michelle, don’t you? Can you imagine the fantastic stories? Blog posts for a year.

More often than not I find myself reading The New York Times. It’s the paper of record. The Gray Lady. Sometimes, they’re difficult to take seriously, too. Do you know who they profile in The Times? People like 85-year old Betty Halbreich, “Bergdorf Goodman’s renowned personal shopper and the breakout star of the 2013 documentary ‘Scatter My Ashes at Bergdorf’s.’” The profile takes place in Halbreich’s eight-room Park Avenue apartment where…

…every bibelot sparkles and every surface is dust free. “My poor cleaning lady!” she said. “I’ve had her for 20 years, and everything is kept clean under threat of death.”

Is that supposed to be funny? What if that cleaning lady was your mother? What an insane old cow. She’s like a Saturday Night Live sketch about self-absorbed, wealthy dingbats. And The Times likes to represent itself as the voice of the common people. Please.

Bibelot. Give me a break with that stuff.

…and here’s after. The ceilings were caked with centuries of smoke from those holy smudge pots the priests swing around on a gold chain. They’re gussying-up the exterior as well. 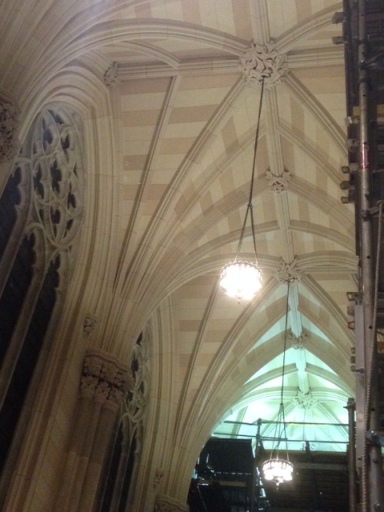 64 thoughts on “The Fourth Estate”