Since my past seems far more interesting than my present (for the time being, anyway) here’s another journal entry. This time, a holiday adventure in Phoenix, Arizona, to visit an old flame.

Cathy picked me up at Sky Harbor three days ago. She had to fire another nanny. This one was even crazier than the last one. This one dyed Amy’s hair blond. [Note: Amy was Cathy’s five-year old daughter. Her father was Mexican. She had a dark complexion and jet-black hair. A beautiful child.] It turns out the nanny’s daughter died a decade ago when she was just five. She had—you guessed it—blond hair. Cathy was pretty rattled. She probably dodged a kidnapping by a few days. Amy looks bizarre.

We went to the dog races with three of Cathy’s friends; Jeff and Brian, who I think are gay, [Note: Were they ever!] and Barkley. Beforehand, Cathy told me that Barkley was [theater director] Peter Sellars’ father and I didn’t believe her, but he looks just like him so it must be true. It was 50¢ night at the track. The parking, admission, hot dogs and tacos were all 50¢. Do you know how many tacos you can slam at 50¢ a pop? Quite a few. Jeff has a deep knowledge of dog racing (due to his gambling addiction), so I followed his lead in betting. We lost every race. He ran out of money and asked me, someone he barely knows, for $2 to bet the last race. Pathetic.

Dog racing is a tragic comedy. There’s a TV monitor in the clubhouse so you can watch the dogs being loaded into the starting gate. It ain’t pretty. They’re shoved into tiny, dark boxes by Mexican kids. The handlers grab them by the collar and rear ends and throw them in. It looks like an uncooperative cannonball being coaxed into the mouth of a cannon. A metal door slams shut behind them.

I always thought the dogs chased a stuffed bunny but Jeff said the Humane Society put an end to that so now they chase a bone with white streamers. It travels on a rail that circles the track. The race starts and the dogs shoot out of the starting box like the devil’s twisting their tails. They look gaunt and emaciated, but they are fast, fast, fast. They chase after it like they’re crazed or starving. They sprint at top speed. Then the bone suddenly takes a sharp left around the first turn and that’s when all hell breaks loose.

The track is loose dirt and you’d think that’d provide enough traction, but in every race a few dogs lost their footing on that first turn. Greyhounds run about 40-45 miles per hour (I looked it up) and when they fall, it looks like a giant ball of dirt rolling at a high rate of speed with legs and a tail sticking out of it. Like a Warner Brothers cartoon. In a few spills, the dogs became projectiles and took out a few other dogs with them. It’s a canine freeway crack-up. It’s so sad and so funny. The crowd would let out a collective “ooooohhhh.” I think they liked it the same way a NASCAR crowd likes a car crash or a hockey crowd a good fistfight. The spills are so violent that you’d think the dogs would be all busted-up with broken bones and a fucked-up sense of direction but they’re troopers. They pick themselves right up and take off after that damn bone.

The race ends and the bone is suspended just above their reach. They yelp and leap wildly trying to get at it and their trainers run out onto the track and harness their dog. I watched every race from the rail because I didn’t want to miss any good crack-ups. Plus, the clubhouse was like a fucking gas chamber with all the cigar and cigarette smoke. By the end of the evening I think there was a film of smoke on my eyeballs because they were burning. What’d I expect?

I thought this was an interesting juxtaposition. The olde world streetlamp. The Empire State distorted in the background reflection. 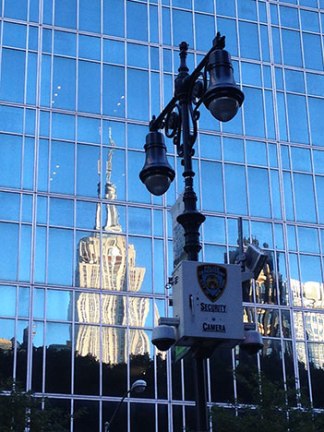 I saw this after the fact.

I’m not sure how I feel. This place is a target, there’s no doubt about that, but I don’t like being watched.

55 thoughts on “Dog day at the dog track”