I’ve read some negative reviews in my time but nothing like what’s raining down on the Björk “mid-career” exhibit at the Museum of Modern Art.

Ouch. She said it reeks.

I attended a preview and thought the show was okay (just), but after reading some of the scathing critiques, I’ve come to the conclusion that it’s as bad as they say it is. They make some astute observations, these critics.

I’ve had a bug up my ass about Björk for years. Occasionally, an artist will say something that’s so insipid and void of perspective that it leaves me with an ambivalence towards their work that won’t fade away. For instance, back in 2010, while one-note actor Michael Cera was promoting Scott Pilgrim vs The World, he delivered this nugget of clarity:

“I don’t really want to be famous, and I’m kind of scared that might be happening.”

Then don’t be a MOVIE STAR or take a lead role in a BROADWAY PLAY, stupid. I could go on with similar examples. (And, in fact, I have.)

In 2000, Björk was promoting Dancer in the Dark, a movie she starred in with Catherine Deneuve for which she received much praise and an Oscar nomination. During a press junket, she said filming was:

What an idiot. I’ve done neither, but I’m fairly certain that making a movie is nothing at all like fighting in Vietnam. She lives in a vacuum. I’ve dated girls like Björk. They’re in a constant state of crisis—a crisis that’s usually of their own construct. They’re malcontents who’re always spoiling for a fight and feel the world is against them. After she said that, I lost interest in her work.

Flash forward. I entered the exhibit with an open heart. I resolved to judge her work on its merits and forget about this foolishness from 15 years ago. I had a nice enough time but it’s like the Orlando Hard Rock Café without the overpriced hamburgers. Examples of her hand written lyrics and journals were under glass. Man, I don’t care about her scribblings. And journals? Give me a break. Who wants to read someone’s journals?

Before entering the exhibit, you’re given an iPod and a pair of pretty decent Bang & Olufsen headphones. There’s music and spoken-word narration for each individual gallery. The tracks are triggered by motion detectors. As you move between the small, cramped galleries, the music and narration changes automatically when you cross a threshold. It’s a clever conceit but I soon lost interest and relegated the audio portion to the back of my mind. I couldn’t understand the dialogue over the music. It was only later after reading some reviews I discovered there’s a linear story being told about Björk being on a journey. Who knew?

The galleries contained videos and costumes from her live performances. There was her swan dress from her night at the Oscars (on a cartoonish likeness of her). The eggs are a nice touch.

A translucent, nipple-pierced Björk was dressed in this Alexander McQueen gown. It slowly rotated on a pedestal. 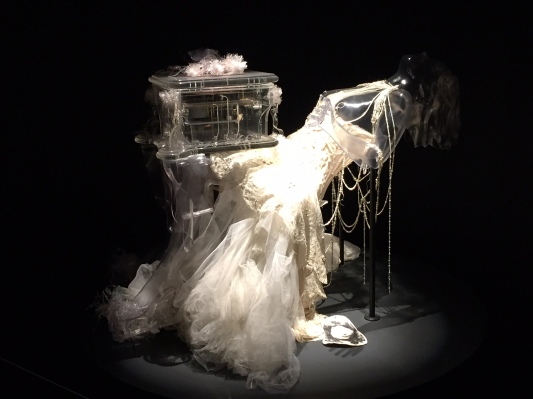 The Bell Dress, another McQueen creation, along with headpiece hair sculpture by Hrafnhildur Arnardottir.

The cool robots from her All Is Full of Love video. 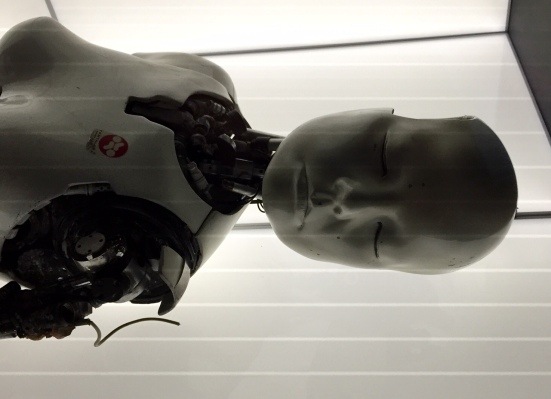 I’m not entirely certain where these were used. The gallery was packed and I couldn’t get to the description card. But they were interesting. They must have been uncomfortable to wear. If anyone can fill in the blanks, feel free. 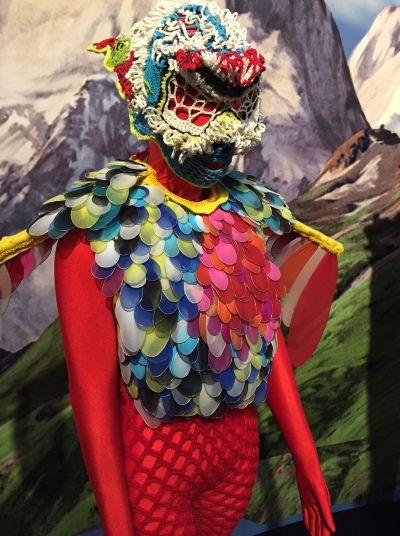 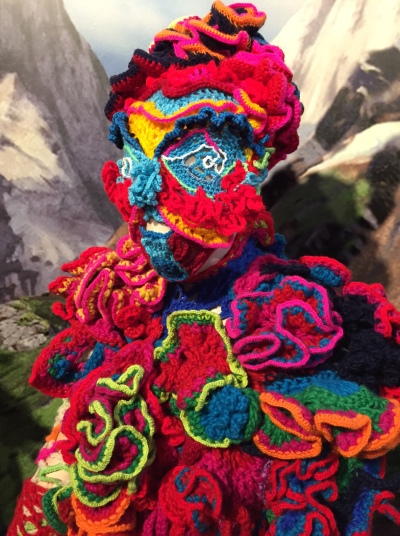 Her videos, arguably the bread and butter of her oeuvre, are relegated to a room with serviceable projection and uncomfortable foam furniture. It’s a shame because the camera loves her. The guy sitting in front of me had horrific B.O. and I had to leave earlier than I would have liked. That’s not Björk’s fault.

She created a new work specifically for this exhibit. It’s a :10 minute film for Black Lake, which appears on her new album. It’s about her breakup with conceptual artist Matthew Barney. You enter a dark, circular room with two large facing screens and sit on the floor. A great sound system cranks up and you see a film of Björk crawling around on her knees in a cave, emoting, beating her chest and singing a song of unrelenting heartache.

Family was always our sacred mutual mission
Which you abandoned

Oy. What melodrama. Even during my worst break-ups I never thought the pain and horror was eternal. I would never commit thoughts like that to paper. They say artists “feel” more. Maybe that’s true.

This is the 7th anniversary of my blog. Here’s to another seven years *ting*.

Life’s but a walking shadow, a poor player
That struts and frets his hour upon the stage
And then is heard no more: it is a tale
Told by an idiot, full of sound and fury,
Signifying nothing.

Did Shakespeare maintain a blog? Sure sounds like it.