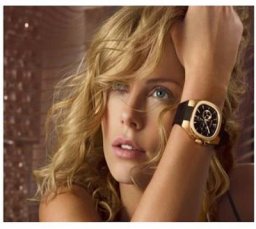 How far out of touch with reality can one Hollywood starlet be?

Swiss watchmaker Raymond Weil paid Ms. Theron a reported $20 million to shill be their spokeswoman and wear their watches exclusively.

Here on planet earth, that’s an extraordinary amount of money to do nothing. And by “nothing,” I’m not speaking in metaphor or allegory. All she had to do was pose for some pictures and wear a stupid wristwatch when she went out at night. What could be easier? Well, guess what? She couldn’t do it. She was photographed at a film festival wearing a Dior wristwatch, was sued, and a judge ordered her to give all that money back. A contract is a contract!
What happened? Did she forget? Not care? How arrogant. How dreary.
* * *
I hit a triple on my train home last night. I knocked out three—count ‘em—three cell phone calls at one time when I activated my cell phone jammer. I’ve hit hundreds of singles, a handful of doubles, but this was my first triple.
It never gets old.
* * *
The U.S. Presidents from 1776 to present.

10 thoughts on “Is Charlize Theron the Dumbest Woman on Earth?”