There’s a dangerous new distraction in my hometown of Cleveland, OH. We drove nine hours west to visit my family for the big annual Thanksgiving face-stuffing. In an attempt to commit as many deadly sins as possible, I visited this new pleasure dome located in the heart of downtown.

I don’t know what legal rational they conjured up to circumnavigate the anti-gaming laws—clearly this isn’t tribal Indian land, which is the usual justification—but I’m glad they did it. Don’t get me wrong. I think generating revenue via casino gaming is a HORRIBLE idea. The unchecked spread of gambling is going to create a nation of addicts. But if I don’t have to travel too far out of my way to belly-up to a craps table, I’ll go. The moths-to-flame metaphor has never been more appropriate.

I made two passes through this hallowed cathedral. Once with an old friend and the next day with my sister and brother-in-law. God, I love crap tables. Roulette is a fine, elegant game. Casually paced with an old world charm. But dice release the endorphins we’re all aching for. (Pair of dice = paradise.) I love how they feel in my hand. If you squeeze them tight, the pointed edges leave little marks in your palm. I love the language of the game and the cataclysmic highs and lows.

You can strengthen the bonds of a friendship at a crap table. You celebrate the drunken success of a hot roll and console each other when you stupidly throw away $100 in :20 minutes. “We’ll get it back,” we tell each other. And sometimes we do. That’s the truth and beauty of the game. I’ve witnessed significant amounts of money lost by people who had no business whatsoever being inside a casino. Who doesn’t love to watch a good meltdown now and then? As long as it’s not you. How’d I do on my two visits? I never kiss and tell.

Gambling is a curse that I inherited from my father. The only time that guy ever paid any attention to me at all was when he gave me a weekly football pool to fill out. You don’t need an advanced degree in psychology to figure out what happened. I plan on keeping The Daughters as far away from the casinos as possible and to skillfully mask the raw joy that gambling affords me.

Aside from the gourmet feast served up by my sister on Thanksgiving, I also treated myself to this beauty:

You want to lick your monitor, don’t you? I suppose it’s because I was raised on it, but for my money, the Cleveland style of pizza is the best. It’s not the thin, cardboard crust served in New York City and not the doughy Chicago deep dish style, either. It resides somewhere in a perfect middle. Just like the city itself.
Nobody likes anchovies. Those are some fat, fine examples above. I usually have to go solo. You can’t go half and half because the anchovy oil permeates the entire pie. My kid’s culinary fussiness in regards to anchovies might be attributable to the Irish blood flowing in their veins. But what a bunch of piss-poor excuses for Italians on my side! No green olives either!? Do we even have the same mother? Sometimes I wonder.

Like Loading...
Why punish a region just a little bit when you can punish it a lot? It wasn’t enough to get hammered by Hurricane Sandy. A few days after that, a powerful nor’easter rolled in off the Atlantic bringing with it a staggering amount of wet, heavy, snow.
Most of the trees haven’t shed their leaves so the snow settled on the branches and weighed them down until their tips touched the ground. Many limbs snapped under the strain. Our power was knocked out AGAIN. I thought the girls would be cowering in abject fear because of the storm and darkness but when I walked in the door after a 3:30 commute through a raging blizzard, I found them singing Christmas carols by candlelight.
My property suffered more damage from this nor’easter than it did the hurricane. Mrs. Wife and I were lying in bed reading when we heard a few pops and then a long, loud, slow-motion, unmistakable cracking. Timber! A massive tree in our back yard split nearly in half. It missed Casa de Unbearable, but not the wooden fence surrounding my back yard. It’s a mess. Good God, what next?
In order to get to work the following morning I had to brush several inches of snow off my car and clear  debris from the driveway. The city was a slushy mess but most of the snow was gone by midday. Here are few Central Park shots.
The park was closed because of the storm damage. You could only walk around the outside perimeter. It looked kind of spooky without any people in it. I Am Legend stuff.

This is not my doing. Art is all around us. 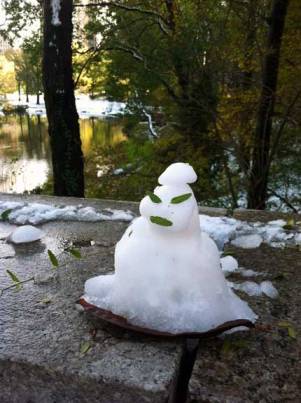 The third storm of the week was the emotional fireworks and pathos put on display by Al Pacino as broken down real estate shark Shelly “The Machine” Levene in David Mamet’s scorching Glengarry Glen Ross.

Pacino’s name is above the title, author and director because he’s the guy who puts asses in seats, but the entire cast is great, especially oily John C. McGinley. I question the director’s choice for pacing. Mamet’s dialog should be thrown at you with machine gun rapidity. Here, the delivery is more measured. When I see one of Mamet’s works, I don’t want to have time to think.

Like Loading...
The autumn Impressionist and Modern Art Auctions are about to take place at Christie’s. I previewed the lots on my lunch hour. Here are few highlights with the estimates—because half the fun of these auctions are the price tags. I am still blown away by what people are willing to spend on a wall hanging. It’s important to view these works while you have the chance because it’s the only time many of them will ever been seen in public. They’re passing from one private collection to another. Once the auction is over, they’ll disappear above someone’s mantel on 5th Avenue. Additionally, I use the auction preview as an effective way to confirm my position on the economic totem pole.
I’m going to make a blanket statement and say these photos do no justice to the work. The lighting is poor for camera phones. I’m still waiting on my iPhone 5 upgrade with its superior camera sensor. After the auction, I’ll come back and post the prices realized. More rubber-necking.
This sculpture greets you at the entrance. Tulips by Jeff Koons. I like it. It was a sunny, blue-sky day when I saw it and the light gleamed bright off of its surface. They’re in a shallow reflecting pool, which is a fantastic way to display this.

My favorite part of this piece is the estimate. The estimate is: “Estimate on Request.” Do you know how much that is? It’s a lot. It’s if-you-have-to-ask-you-can’t-afford-it. SOLD: $33,682,500. And you would display this where, exactly? 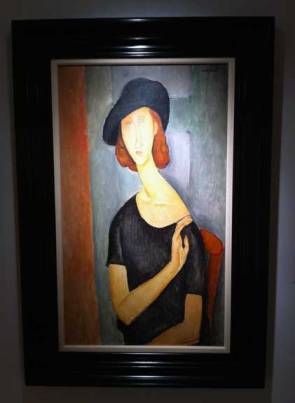 Sun Water Maine by Georgia O’Keeffe. I had to take this pic at an angle because of the terrible glare on the glass from the gallery light. Poorly hung, but beautifully painted. Est. $1,000,000-1,500,000. Might be worth it, if you ask me. 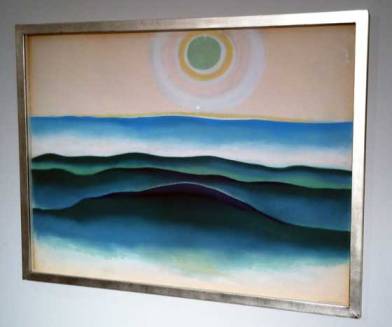 Two by poor, prematurely dead, Andy Warhol. Statue of Liberty. Estimate on Request!? Really?! I wonder why? What makes this one so special? I can’t wait for the results. SOLD: $43,762,500. I found out what the big deal was. It’s printed in a green/red overlay and if you wear 3D glasses, it pops. 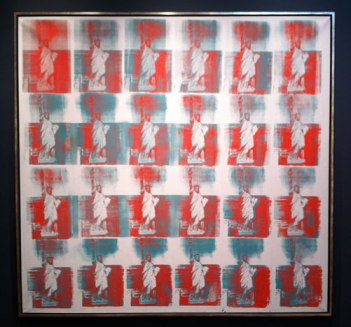 With every auction there has to be some junk thrown in. It proves, time and time again, that wealth is not a barometer of good taste. It’s up to me, from high atop my pedestal, to point out where people are being careless with their discretionary income.
Oh, my, my. Moutons de Laine, Un Troupeau de 24 Moutons by François-Xavier Lalanne. It’s stuffed sheep. 24 of ’em. He didn’t bother to put heads on some of them. So lazy. They’re mingling in the corridors that lead to the galleries. See the black one in the middle? So clever. Est. $4,000,000-6,000,000. Help yourself. Baaaaaa. SOLD: $5,682,500.

I have never seen a painting by Jean-Michel Basquiat that I thought was worth a damn and this certainly doesn’t change things. Untitled. Estimate on Request?! Is that a typo?! SOLD: $26,402,500. Proving, once again, that crap sells. 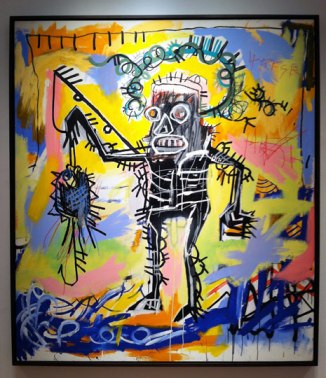 Prag 1883 by Gerhard Richter. Est. $9,000,000-12,000,000. I cannot fathom why anyone would spend 10 MILLION dollars on this. I know Richter is hot right now but that’s no excuse. I don’t mind being challenged but this thing is beyond my ken. Feel free to school (or scold) me in the comments section. DID NOT SELL. Because it’s crap, obviously.

When I moved to New York City as a single young stallion umpteen years ago, the last thing on my mind was the possibility of being engulfed in a hurricane. Mugged? Flat broke? Long, long periods of time without the kind favours of a girl? Yes, yes and yes. All that happened. But a hurricane? No way. It just goes to show you; you think you have all the angles and possibilities accounted for but it turns out you’re just a punk who can’t tell art from a fart.

Back home, our power inexplicably came back on after only two days. Jersey Central Power and Light pulled a Muhammad Ali rope-a-dope. They said it would take 7-10 days and did it in only two. Now they look like Gods. The fact that we live near a hospital might have helped. The juice is only flowing to a small enclave of houses. Many are still in the dark. Mrs. Wife has hosted an unending parade of people who stopped over to charge their electronics, use our shower and get a hot meal. School is closed until the 13th so she’s also minding a gaggle of children whose parents both work and cannot take time off. That woman is a SAINT, I tell ya.

A large swath of Manhattan is still without power. My morning commute takes me in through the Lincoln Tunnel. Just before disappearing underground, I’m treated to a spectacular sweeping view of Manhattan. Currently, there’s a demarcation line right around 23rd Street. North of that line, the lights of Broadway are burning bright. South of that, it’s pitch black. It looks like a big budget sci-fi horror show. The New York City Marathon has been cancelled, which is a pretty BIG DEAL out here. People arrived from all over the world to run. Now there’s no reason for them to get out of bed early Sunday morning.

Instead of posting pictures of the destruction, of which I have plenty in my iPhone and which I’m sure you’re sick of seeing, I’ve decided to post this video. I recorded it a week before the storm. A love letter to my poor, broken city. Autumn in Central Park. A gentle saxophone plays while tourists stroll and take pictures. The musician sways. A reflection in the water.