This is an episode I’d forgotten about. These journals occasionally stir up memories that are best forgotten. 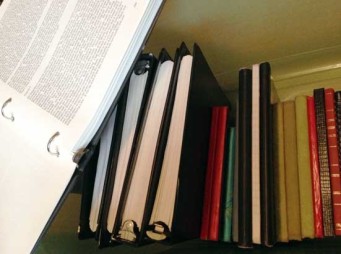 More roaches. Not as many as before, but more. I began my death-spray campaign two weeks ago but they’re still here. I saw one crawling up the bedroom wall last night and a few in the silverware drawer this morning. I locked the cats in the bedroom and doubled-up on the insecticide. I’ve got a tremendous, pounding headache. I don’t know if it’s from breathing Black Flag Inner City Strength Formula or from cleaning up cockroach droppings all morning. My index finger hurts from holding the spray button down. I emptied the can.

There was a sick article in The Times about how there’s a plague of asthma in the Bronx. It’s an everyday occurrence to see men and woman stop on the street to catch their breath and reach into their pockets for an atomizer. Do you know what they say is causing this epidemic? An inordinate amount of cockroach feces and body parts, along with the rat and mice urine in the area.

I’m going nuclear tomorrow morning. I’m taking the cats to Cindy’s apartment and setting off a roach bomb. But if the dirty slobs who live around me don’t get their shit together, it’ll all be a big wast of time and money.

This exhibit at the Canada Gallery on Broome St. is an exercise in warped perspective. It’s going to be difficult to describe but I’ll give it my best shot. It might help to click on these and get a magnified look.

A Fall of Corners by Samara Golden starts with a walk up a short flight of stairs onto a long platform. 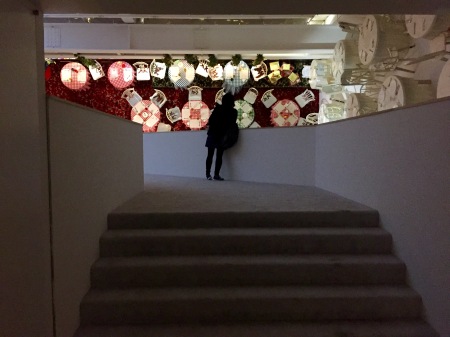 Along the right-side wall is a formal dining room with full-sized tables and chairs. Tables are set with white linen tablecloths, white chairs and place settings. The linens are stiff and hang as they would if the tables were on the ground. Plates and cutlery are glued to the table, the chairs are secured to the wall. 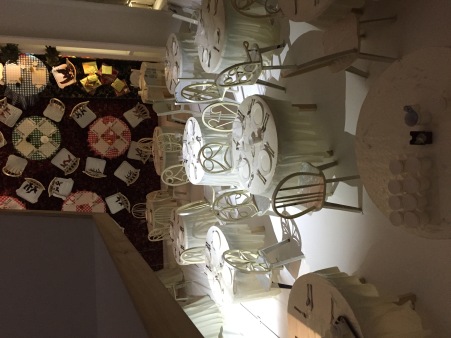 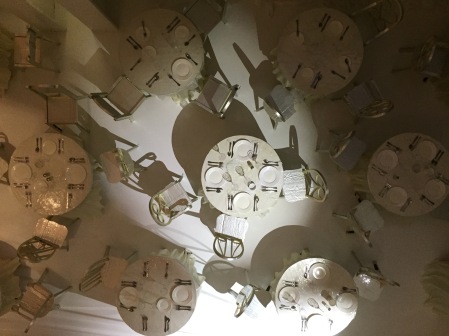 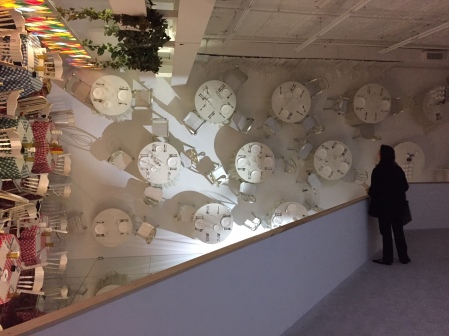 On the far wall is another dining room. This one, a more casual and festive buffet with blue and red checkered tablecloths and country chairs. 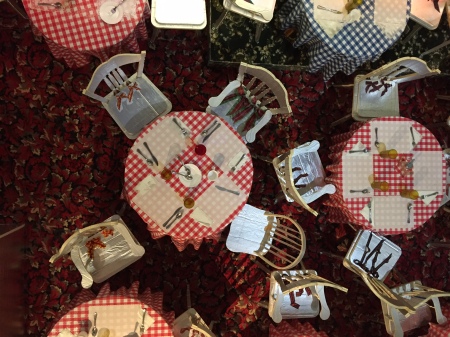 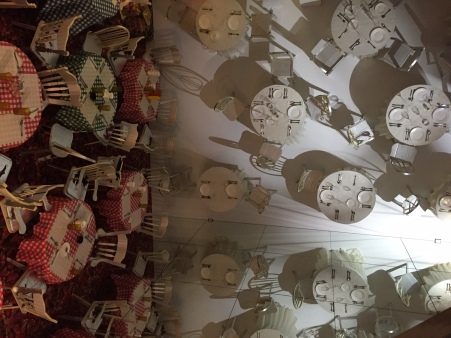 If you stand at the edge of the platform and look down, you’ll see a mirror. It creates an effective illusion of depth and space. 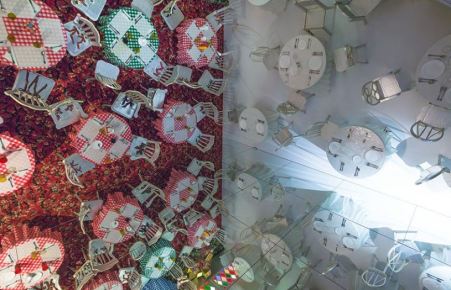 Turn towards the end of the platform and thrown into a heap in the corner is, what appears to be, a pile of rags. 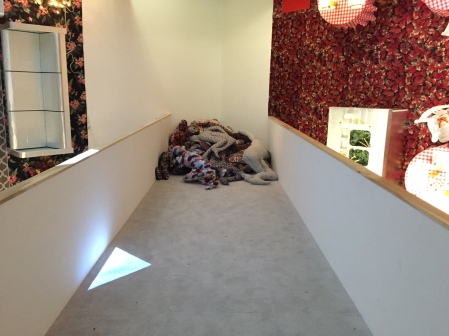 Closer examination reveals the truth: Bodies. Some are ghastly and skeletal. Who are they? The diners? People who wanted to eat but couldn’t? 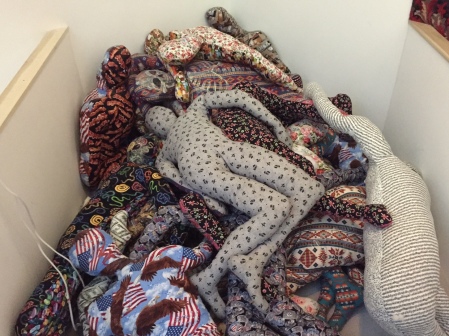 Running up the left wall is a living room with silver furniture and, in an especially nice touch, a Christmas tree in the corner. 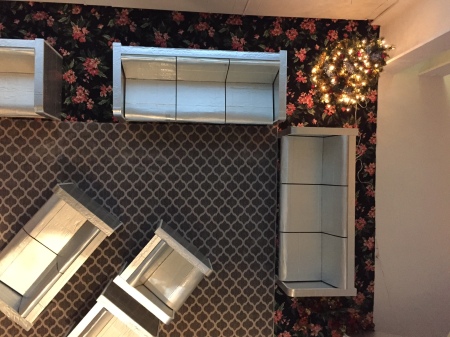 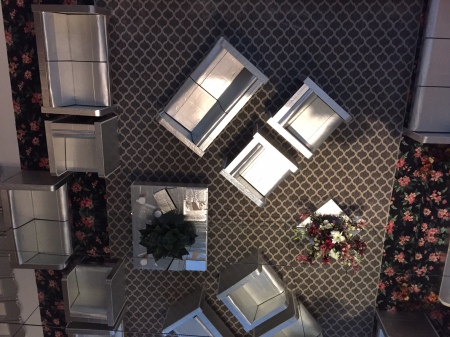 By this time, I was fairly disoriented. I wish I’d know about this warped perceptive in advance. I’d have dug out my bong from the attic and REALLY prepared. Once again, look over the edge and there’s a mirror. A projector plays a movie of moving clouds and sky. You’ve got to look down to look up. See your intrepid reporter there? Hello! 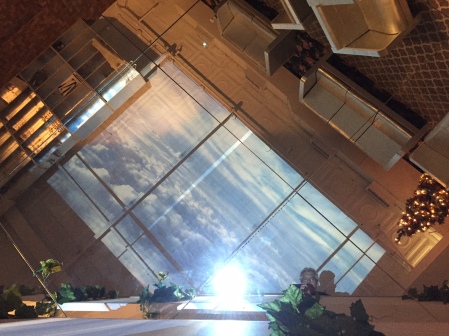 I’ve often wondered what the end game is to these exhibits. I can only presume they’re for sale, since they’re in a gallery. But who is the target audience for these large works? Museums, I suppose. Fun fact: NONE of these galleries ever charge an admission. And, best of all, they don’t care if you take photos. New York is a friendly place!

I had dinner on the Lower East Side last Friday night. We ate at Little Poland on 2nd Avenue and 12th Street. I had the big combo platter: Kielbasa, pierogi, bigos and stuffed cabbage. About four pounds of thick, heavy, gravied, Eastern European delights. Most satisfying! Unfortunately, I had forgotten that I had to run a charity 5K race the very next morning. Oh, no! Well, guess what? I killed it. I ran a personal best. It turns out that Polish food = ROCKET FUEL. Who knew?

Apparently, I was just as lazy and unmotivated 20 years ago as I am today.

Here, in no particular order, is what I usually end up doing when I sit down to write:

The Gagosian Gallery on 23rd St. in Chelsea recently featured this work by Michael Heizer. 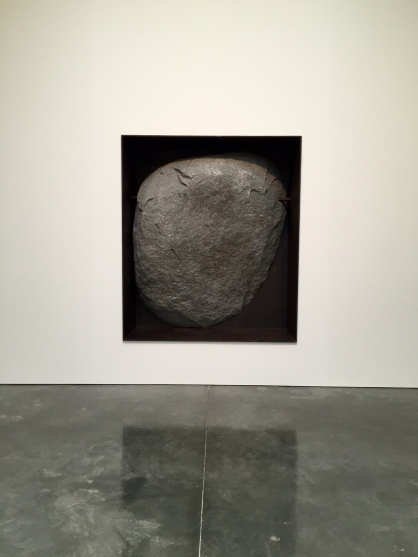 It’s a 5.7 ton hunk of black granite mounted with a metal rod (apparently, a damn strong one) inside a weathered steel frame. 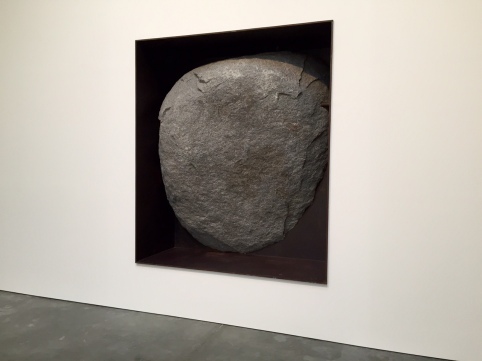 You can say it’s just a rock in a box. A reasonable argument can be made that it has little to do with art. But when I walked into the gallery, it filled me with a moment of awe. Perhaps it was the juxtaposition of the surrounding white walls or the fact that no one else was there. Just me and this big, stupid, imposing, beautiful rock enveloped in a thick, heavy silence. It really did work for me.

Since it’s in a gallery, I have to presume it’s for sale. I wonder how much? It’d pull the side of my house right down. 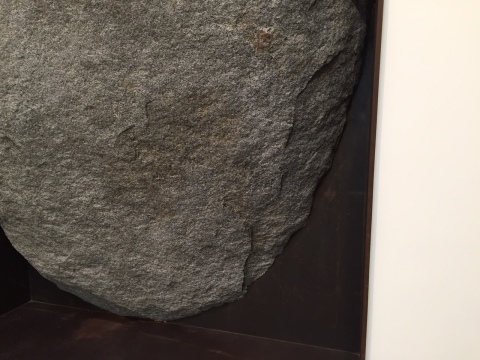 Over at the Sean Kelly Gallery is this clever eye-trick by Idiris Khan. 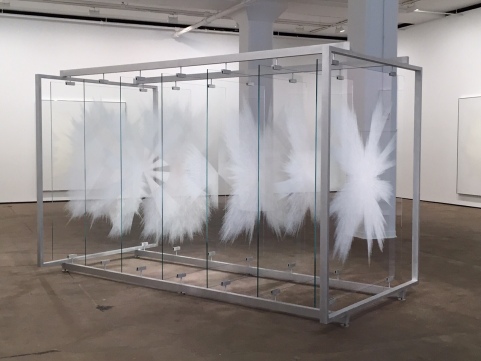 A feather pattern printed in white on hanging panes of glass. Stand in front of it and light streams through. 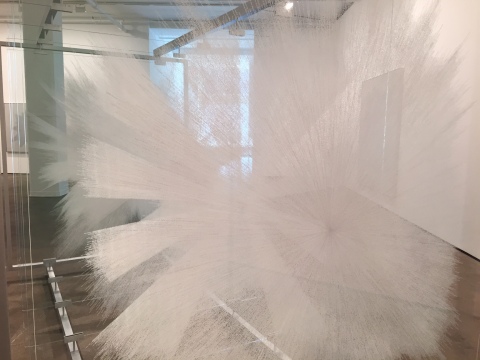 Move in close and its secret is revealed: They’re sentences. 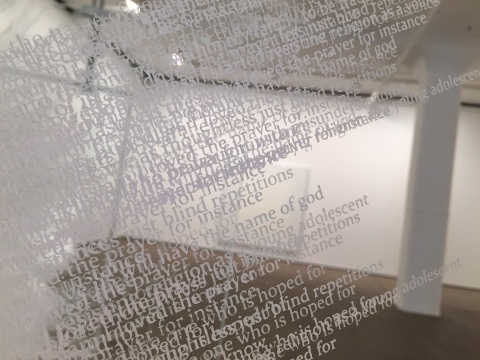 Printed words layered until they merge into each other. I couldn’t make sense of what it said, which I imagine is intentional. The message is the pattern, not what composes the pattern. I think.

Khan also printed this large piece on a wall at the gallery entrance. [Note to self: Next time, include an object to show scale.] There’s no way to preserve this. It’ll simply be painted over when the exhibit closes. 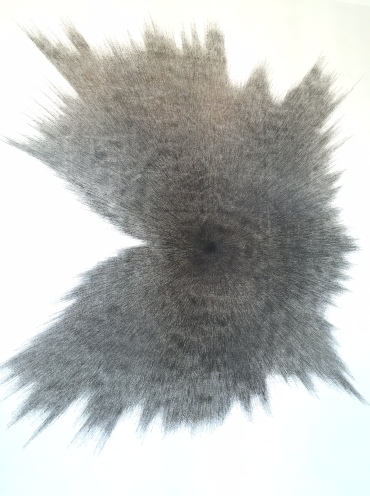 This one includes layers of English and Arabic. 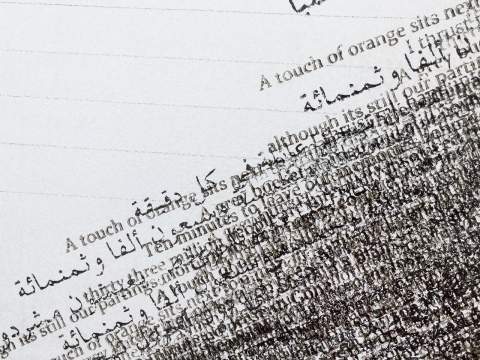 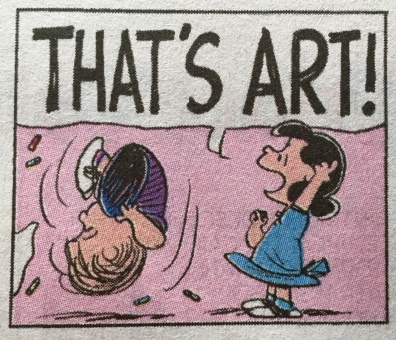 In tonight’s shocking episode of “The Andy Griffith Show”: 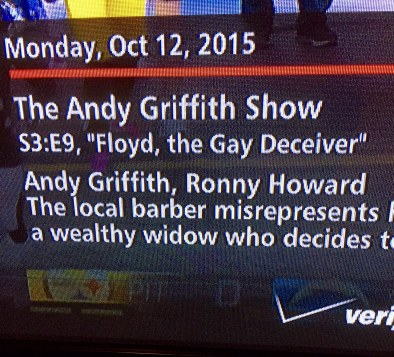 iiiiiiii…KNEW IT! It’s so obvious in hindsight. I always thought Floyd was a little light in the loafers. And he was the town hairdresser, after all. 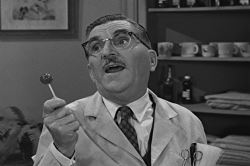 I went to church a couple of weeks ago. I occasionally attend and always go with an open mind and an open heart. It meant a lot to my mom and it’s meaningful to My Bride. I want to be respectful.

The first reading was a faerie tale about how God put a man to sleep, open his chest, extracted a rib and invented women. I am astonished that people still believe this is how women evolved. And please don’t tell me it’s an allegory. If that’s the case, are there other allegories I should be made aware of? How about the resurrection?

The second reading was from the New Testament. Jesus was asked his opinion about remarrying after divorce. He deemed it tantamount to adultery. That means that my mother, a devout Catholic who spent untold hours performing charitable works in the Church’s name, is now burning in hell as an adulterer. My blood started a slow simmer.

Instead of a Gospel reading, we were treated to a video by The Most Rev. David M. O’Connell, the Bishop of the Archdiocese of Trenton. He announced the beginning of the Faith to Move Mountains fundraising initiative. The church needs cash. He said he didn’t just want us to give. He wants us to give until we feel the weight of a true sacrifice. I took that to mean we should give an amount that causes some mild economic distress to our household. This church [not our regular church] serves an affluent community and is known for its aggressive fundraising. We know someone who was called at home and told a $10,000 contribution would be an appropriate amount to give.

After listening to a load of blarney about how women were invented and then being told that, according to a strict interpretation of Catholic doctrine, my mother is no better than a common whore in the eyes of the church, they wanted me to give them some money.

So that didn’t go as well as I would’ve liked. 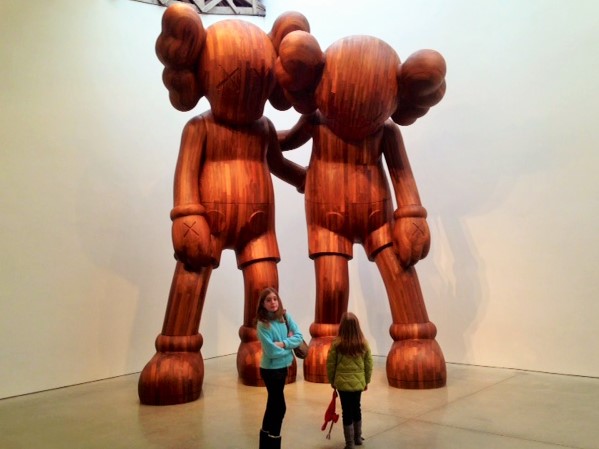