I met Nurse H after work for a bite and a show. Sometimes, New York has a way of throwing in a few unexpected bonuses. The evening would have been satisfactory enough as is, but as we moved from one venue to the next, some flourishes were added.

The restaurant didn’t open for dinner until 6:30, so I met her for a drink at The Garage down in the West Village on 7th Avenue and Grove Street. As I came out of the Christopher Street subway station, I realized that it had been a long, long time since I visited this neighborhood. It was like seeing an old friend again. At the bar, Nurse H was nursing a glass of red wine. I had a post-work Belvedere on the rocks to decompress from a horrendous day. We chatted for about twenty minutes and then, right behind us, this began:

An early show! It was only 6:00 p.m! Where else can you accidentally stumble across a live jazz combo that early in the evening on a Thursday night? And no cover! A piano, drums, stand up bass and lead trombone. I love a good trombone solo, don’t you? Seriously. Do you know who The Specials are? They’re a ska band extraordinaire. Great trombone solos.

They were all top-notch musicians and Nurse H fell in love with the drummer. We dropped a few dollars in the fish bowl and proceeded to the restaurant. We walked south on 7th Avenue and as we came to the corner of Bleeker Street, we stumbled across this guy:

He had a thick stick of white chalk and was tracing the outline of the shadows from the lamppost and street signs. It doesn’t look like much in the photo, but it was actually quite fetching. So simple, but so effective. Free art! 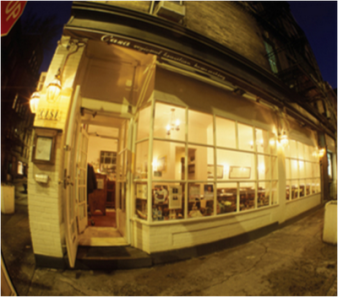 Charm city. Casa is a small, elegant Brazilian restaurant on Bedford St. It had just opened for the evening, so there were only three other couples there. I love empty restaurants the same way I love empty airplanes. I had Feijoada which, according to the menu, is the Brazilian national dish. It’s a black bean and meat casserole with white rice and collard greens on the side. We split a cheese bread appetizer. The meal was so good that I had a dream about it this morning.

We walked half a block down Commerce Street to here:

This is the Cherry Lane Theater, an intimate and storied theater. Lots of early Becket and Albee were premiered here. We saw Fault Lines. It was presented by The Naked Angles Theater Company, who know a thing or two about drama. The first :25 minutes of the play consisted of some amusing dialog that introduced the characters and a slowly meandering plot. But after one specific line was spoken the play really took off and delivered some powerful plot twists.

You can take the boy out of Ohio, etc. All these years in the city and I still get a cheap thrill out of spotting celebrities in their native habitat. In the audience was John Slattery and sitting next to me on my left was the play’s director, David Schwimmer.

Last spring I bought a Lenovo ThinkPad. (Not such a great laptop, by the way.) At the time, the only option I was given for an operating system was Vista. I told the Lenovo salesman that I had HEARD you could get Windows. He relented and said that for an additional fee I could have Windows installed but he strongly recommended Vista because Windows was being phased out. I cheaped out and got Vista, even though it has a reputation as a memory hog.

Here’s a headline that greeted me in this morning’s New York Times:

You BASTARDS! Vista has been so maligned by the public and so beaten down by a merciless ad campaign by Apple that it is negatively affecting Microsoft’s bottom line, so they’re dropping it.

I feel like I’ve been played for a fool.

R.I.P Gerard Damiano. Damiano directed Deep Throat, the film that brought pornography into the mainstream. Deep Throat was funded by the Colombo crime family. Made for $25,000, it went on to gross more than $600 million worldwide.

You could almost draw a thread linking Deep Throat with the invention of VHS, then DVDs and the commercial use of the internet. And, no, that’s not one of my clever sarcasms.

I went to a meditation class last night. I’ll tell you one reason why I love the Buddhists so much: They don’t proselytize. Ever! If you want to learn how to meditate or learn about Buddha’s teachings, you have to seek it out. You have to ask to be taught.

The Christian and Muslim lunatic fringe have a frighteningly dissimilar mandate. They want everyone on the planet to convert to their belief system. It’s a matter of life and death. The Christians condemn you to hell if you don’t and the Muslims want to blow you off the face of the earth. I’m only referring to the violent minority of these two religions, but they exist.

Have you ever heard of a sect of maniac Buddhists monks who will threaten your life (or afterlife) if you don’t convert? Of course not. In fact, they say that using meditation in conjunction with your already existing belief system will enhance your spiritual journey. (I can’t stand that phrase. Spiritual journey. It sounds too flaky and new age-y but I can’t come up with a better one at the moment.) There’s never a suggestion that you should abandon your faith.

I admire the Jews for the same reason. They don’t threaten you if you don’t convert to Judaism. In fact, there are some hardcore Jews who want to kick a lot of Jewish people OUT of the faith because they’re not Jewish enough! Reverse proselytizing.

I had some time to kill before class so I popped into the Public Library on 42nd Street and 5th Avenue—the one with the marble lions out front—for an Art Deco Design exhibit. 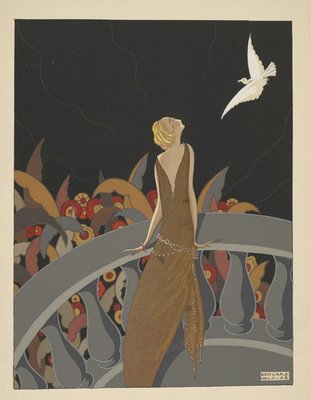 It’s a small but really beautiful show. On display are books, photographs, fabrics, prints and architectural plans all created between 1920-39. What a beautiful era for design! Compare this stuff with the crap that was created in the 70s.

Before class I had a very un-Zen like double Whopper with cheese. I choose not to adhere too strongly to one ideology. While sitting in an orange plastic booth enjoying my greasy fries, a pretty girl who was visiting from Brazil came up to me with an open map and asked for directions to the subway. I happily obliged but I think I might have burped a noxious cloud of beef essence in her direction.

Mrs. Wife’s aunt and uncle had us and few other family members over for dinner on Saturday night. Years ago, her uncle worked for a major asset management firm. I’m not exactly sure what he did there, but whatever it was, he must have been very good at it because he made a TON of money. I always found him a bit dull but there isn’t an ounce of malice in him, and that counts for plenty with me. He’s a good bloke. He was on a path to an easy, comfortable retirement.

Then he got sick.

He contacted a rare degenerative brain disease. They have spent a significant amount of money trying to find a cure but apparently there isn’t one. I haven’t seen him in almost two years and his condition has deteriorated so severely that it’s painful to watch. He seems to be in a semi-vegetative state and can only communicate with his wife with a series of yelps and screams.

Here’s the O. Henry ending: Mrs. Wife’s aunt was made to wait 14 years until he married her. She could have left him and found someone else but she loved him and chose to wait. They got married and had two, maybe three good years together and then he started to deteriorate. Now, she is little more than his nurse. I watched her spoon feed him his dinner. They have an absolutely stunning house but I’ll bet they’d swap it for a room above a garage if he could have his health back. It’s heartbreaking.

I know it’s an overworked cliché but, seriously everyone, count your blessings.

There were some people at the dinner who are missing a racial sensitivity chip. Can you hold them responsible for the terrible things they say if they really have no idea how insulting they are? They have spent their entire lives surrounded by white people. They’ve never had a friend who is a minority and wouldn’t know how to behave around them. The Mom was describing the Halloween costume her future son-in-law was wearing to a party:

He went as Isaac from The Love Boat. They hired a makeup artist. His skin was painted brown and they made his nose and mouth look bigger. It looked really great.

Actually, while I was typing that I got angrier. I’ve changed my mind. They’re not innocents. They’re ignorant racist pigs. I should have said something. Bad on me.