I was navigating my way across a crowded 42nd Street and through the beautiful madness of Grand Central Station and my iPod shuffle, freak show that it is, selected Five O’Clock World by The Vogues. Do you know this song? It’s a great example of 60’s American pop and exactly what you’d want to hear on your way to work. The iPod shuffle scares me a little bit.

But its a five o’clock world when the whistle blows
No one owns a piece of my time
And there’s a five o’clock me inside my clothes
Thinking that the world looks fine, yeah

Those are Ian Hunter’s lyrics.

Hunter also had a fairly successful solo career. 80’s hair band Great White scored a minor hit with a cover of his Once Bitten Twice Shy which was, not surprisingly, not as good as the original, and his Cleveland Rocks was the title song for The Drew Carey Show.

When I was a teen, Mott the Hoople was one of the bands I idolized. My fascination with all things British started at an early age. Additionally, Hunter has incorporated his love of New York City into several of his songs, which has endeared him to me even more as the years peeled away.

Recently, I got to see him perform at a free outdoor concert in Manhattan. It was part of the River to River Festival. The Festival is an annual NYC summer event that offers free concerts, plays and readings in parks along the Hudson and East Rivers.

When Mott the Hoople was touring, I was too young and too broke to ever see them perform. Watching him perform Central Park n’ West with Manhattan as the backdrop made my 15-year old glam-rock heart sing. Just look at him. The glam is long gone but the music remains.

Yup. That’s me on my skateboard riding next to 7-Year Old Daughter on her scooter. I can still ride a skateboard as though the devil were twisting my tail. Those of you who know how old I am will look upon me with either admiration for having retained my dexterity so late in life, or sadness for being in denial about my advanced age. 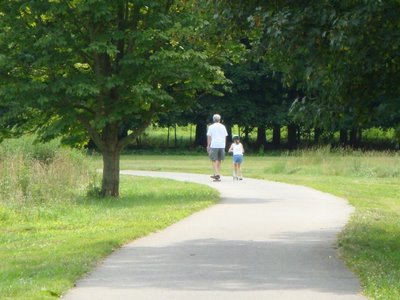 Daughter said I committed a “safety violation” by not wearing a helmet and that I owed her 10 cents. I am policed by everyone.

A tip o’ the hat to Mrs. Wife for taking such fine shots.

Monday morning. I get into my car, back it out of the driveway and turn the radio on.

…Palin stepped down as Governor of Alaska…

…with three gunshot wounds to the chest…

…which makes nine out of 10 victories for the surging Yankees…

The FBI just arrested 44 people and charged them with money laundering and bribery in a sting operation here in New Jersey. Those indicted include three New Jersey mayors, two state assemblyman and five rabbis. The scope of the corruption and arrests is unprecedented, even by New Jersey standards—and that’s saying something! 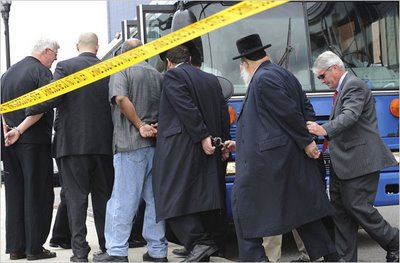 Included in the arrests was an 87 year-old Chief Rabbi who is charged with taking $200,000 in bribes to launder money through Israel. His congregation is located in (of course) Deal, NJ.

In one bizarre episode, $97,000 cash was delivered in a stuffed Apple Jacks cereal box. By who, I wonder? Paulie Walnuts or Big Pussy?

While accepting a bribe, an informant wearing a wire recorded the mayor of Hoboken claiming he was so popular that he would win the election even if he was “uh, indicted.”

But I think my favorite criminal must be Democrat Assemblyman L. Harvey Smith of Jersey City who ran for office on an anti-corruption platform, telling The New York Times: “I don’t take cash. I don’t let people give me things.” He is charged with taking $15,000 in bribes.

Only $15K? That’s cheap by corruption standards. New Jersey: our crooked politicos work at a discount.

On the same day, Evangelist Tony Alamo, who ran a multimillion-dollar Christian ministry, was convicted of 10 counts of sex abuse with his parishioners, some of whom were minors.

Politicians and theologians get paid to tell other people how to live their lives. Ironically, you’ll never find a more vile and corrupt collection of villainous scumbags on the plant.

Humanity, you never disappoint me.