Here’s US Airways Flight 1549—the quickest way to the Hudson River—being towed through suburban East Rutherford NJ on its way to…actually I have no idea where it’s going. A new lawn ornament for Captain “Sully” Sullenberger? The tin can factory? You can click on them for a better look.

I’d credit these shots but I don’t know who took them. My sister forwarded them to me.

Walk out of Penn Station on the 7th Avenue side, cross 7th Avenue and turn left. Walk up one block and just past 33rd street on your right you’ll see this:

Walk inside and for a guaranteed piece of stinky culinary heaven, order up one of these beauties.

What an elegant place setting! The closer I got to the sandwich, the more I realized that in addition to a scrumptious meal that will stay with you a long, long time, it’s also a brilliant piece of Abstract Expressionism

Art that you can put in your mouth and savor. It’s worthy of an NEA grant.

I answered a subpoena and visited the City of New York District Attorney’s office thinking I was going to testify in front of a Grand Jury.

Unbeknownst to me, the Assistant District Attorney decided she wasn’t ready to present the case to the Grand Jury just yet. There were some loose ends she needed to tie up. Apparently, this is a fairly large grand larceny case and they didn’t want to leave anything to chance. My appearance turned into an interview (interrogation is too strong a word to use) with the ADA, two NYPD Detectives and a DA flunky.

I was amongst about a dozen witnesses who are connected to this case. We sat on hard wooden benches in a small hallway and waited our turn to be interviewed. Small talk was exhausted fairly quickly. I got there at 9:30 a.m. and wasn’t called in to interview until 1:30.

I was finally escorted into the DA’s government-issued office (i.e., no wood paneling or stately views of downtown Manhattan. Just blue/grey painted walls and cheap metal furniture.). When I sat in the hot seat, the ADA said, “This is the guy I’ve been waiting to meet.”

Apparently, amongst the dozen or so witnesses, I am the only person who is able to identify the one of the thieves on site. I’m the only one who actually caught him in the act and stepped forward. The thieves stole from gym locker rooms and since it’s illegal to have cameras in public locker rooms, there is no video evidence. I’m all they’ve got.

I’ve always wanted to distinguish myself from the commoners, but this isn’t what I had in mind.

I was told that should this case go to trial (a likelihood, at this point) I would be their key witness. I have to let them know if I leave town. I was assured that there is no danger.

I didn’t bring my cell phone jammer with me because I knew that in order to get inside the New York County District Attorney’s Office I’d have to pass through a metal detector. The District Attorney’s office is the LAST place I wanted to get caught with a potentially illegal device. I had to suffer the cell phone calls of fools on the train back to New Jersey.

Here’s how bad it’s gotten: While waiting for my track number to post, if someone nearby is participating in a particularly loud and noxious cell phone call, I’ll follow him/her onto my train, sit directly behind them and make sure that he/she doesn’t make the ride unpleasant for my fellow passengers. Studies (my studies) have shown that improper cell phone use in the train station ALWAYS translates to improper use once on board the train.

Please don’t judge me. My motivations, believe it or not, are completely altruistic.

I visited the Metropolitan Museum of Art for the Pierre Bonnard exhibit. It’s 80 paintings from his late period. It was nice show but I wasn’t blown away. As usual, I dragged Artisté Florenza with me. Among her many interesting perspectives, she offered that since these works were from late in Bonnard’s career, his sight and skills may have been diminished. Perhaps. There were lots of drawings of fruit in bowls. Do you know what? I hate fruit bowl drawings. Save fruit bowls for art school. Keep them out of the museums, okay?

This was probably the best of the bunch.

I am a creature of habit. After a special exhibit at the Met, I typically beat the same path to 19th- and early 20th-Century paintings and Modern Art but this time, upon Artisté Florenza suggestion, we visited the American Wing instead. That museum is so immense that you can spend an entire day ogling one genre of art.

The path to the American Wing runs through Egyptian Art. Here’s one of the MANY mummies that are on display. 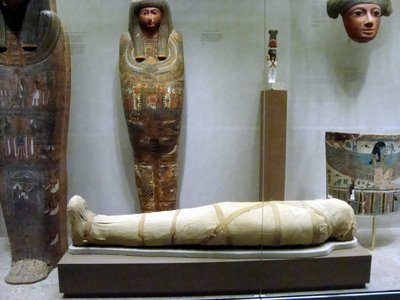 Just think about how creepy this is for a moment. They’re dead bodies, robbed from their graves and put on display. I’m pretty sure that The Metropolitan Museum of Art was never meant to be their final resting place. Can you imagine if, say, a museum in China did that to a Catholic?! Or a Muslim?! It’s a miracle that everyone who stares at these doesn’t walk away with a pox on their family. But they are kind of cool.

After the mummies, you have to walk through the Temple of Dendur. The back wall of this Wing is a huge window that looks out over Central Park. Light streams in onto the Temple and reflecting pools that surround it. The best part of this photo is the silhouetted figures. It was an accident!

Again, what are we doing with an ancient temple in the middle of Manhattan? It’s madness. I don’t want to think about the payback implications.

If you enter the American Wing from the right corridor, you are greeted by this stunning Tiffany stained glass window. 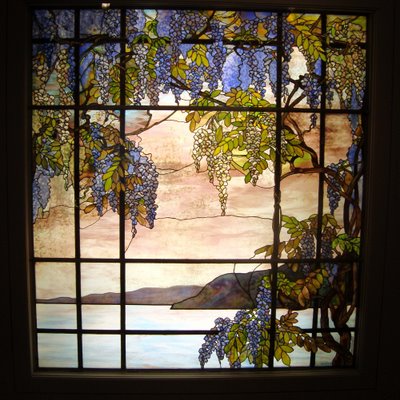 Not bad, eh? There are a lot of Tiffany vases, windows and jewelry on display. Tucked away in a corner is Louis Comfort Tiffany’s actual workbench!

Right off of the Tiffany exhibit is the Frank Lloyd Wright room. This was originally the living room of the summer residence of Frances W. Little, whoever the hell that was. Some wealthy bloke, I suppose. All of the furnishings, windows, light fixtures, carpeting, etc., were designed by Wright. Here’s a good write-up on the room (for Jon, esp). 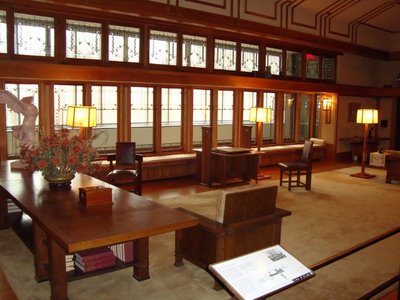 I had always ignored this Wing of the museum but it turns out we Americans can show the Europeans a thing or two about design and art after all.
* * *
Here’s a Paul Klee for my brother, who likes him a lot. 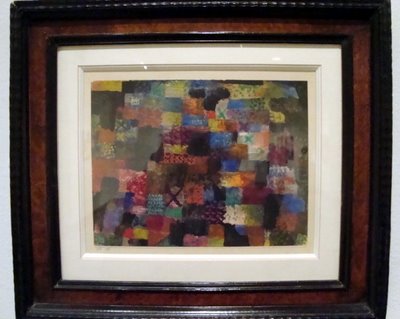 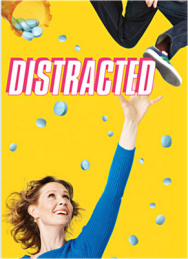 Although best known as the tight-ass Miranda Hobbs from Sex in the City, she has a long stage pedigree that stretches back to her teens. She doesn’t do as much stage work as she use to, but I can assure you that she hasn’t lost her chops.

She is on stage in every scene of Distracted, the high-tension wire that’s about to open at the Roundabout Theater.

A contemporary mom struggles with her unruly 9-year old son. If, when all else fails, she puts him on Ritalin and he becomes a zombie, does that mean she has failed as a parent? The father is not much help in the, “no son of mine is going to be medicated” sort of macho way.

I have no idea where she gets the energy to be a clenched fist for two solid hours but she pulls it off beautifully. And I saw the show mid-week, for cryin’ out loud! Who has that kind of energy in the evening mid-week!? It’s a comedy and there are plenty of yucks, but when she is stretched to her limit and is about to snap, the tears come. This show would be a good initiation for someone who has never been to a play before. It’s got punch.