August Wilson was one of America’s most successful playwrights. His 10-play series, The Pittsburgh Cycle, chronicles the experience of black America through the 20th Century. Each play is set in a different decade. Some characters appear in more than one play. The children of characters in the early plays appear in the latter plays. It’s a bit Shakespearean in scope.

I saw the Broadway revival of Joe Turner’s Come and Gone. It takes place in 1911 during the Great Migration. Recently freed slaves were migrating north to find a new life, causing tension between the white working class and blacks who had already settled in the area.

I saw the original Broadway production way back in 1988 when I first moved to New York. Fortunately, my brain is so porous that I didn’t remember a thing about it, so it was as if I was watching it anew.

I’m afraid that white tourists are going to say to themselves, “Oh, that’s a black play. It’s not for me.” I hope that’s not the case because there are themes of alienation and finding yourself that can reverberate with anyone who has a beating heart. The actors work their asses off to great effect so I hope it finds traction.

I found this beauty while perusing the want ads:

Oh, my God! It’s as if Dickens was having a nightmare about Kafka reading Bukowski’s Factotum.

Tell the little ones to stay in school.

In the middle of this road we call our life
I found myself in a dark wood
With no clear path through.

I hadn’t mentioned this before but back on December 6th, I lost my job.

I worked for investment bank behemoth Morgan Stanley and for 18 months I watched as the company dissolved around me. I survived several rounds of layoffs but was finally shown the door.

I began my job search on December 7th. It has been a relentless, exhausting grind without pause or success.

My best job lead just blew up. It was my greatest hope for employment and it’s gone. I’ve had dozens of interviews over the past three months that have resulted in little more than a smack in the face with a brick.

We got a call from 7-Year Old Daughter’s first grade teacher. She was concerned because Daughter walked up to her and said, “My Daddy got fired and nobody wants him.” I tried to explain the difference between being laid off and being fired, but children do not deal in subtly. She only understands that Dad doesn’t leave the house in the morning anymore.

I sit at the dinner table and look at my two beautiful little girls and wonder how I’m going to provide for them. It feels like someone ripped my heart out of my chest, put it in an empty paint can, filled it with thick, black tar, soldered the lid shut and stenciled “DESPAIR” on the front.

The economy in New York is a shambles but I bear some responsibility for my predicament. I was complacent and allowed my skills to atrophy. Mrs. Wife has been a rock but I can barely look her in the eye. I read the papers and realize that hundreds of thousands of people have lost their jobs, but this is my story.

The healthcare premium for my family is $956/month. We’re just a simple, middle class family.

What am I going to do?

Isn’t “Downtown” one word? Don’t they proof their tile mosaics? 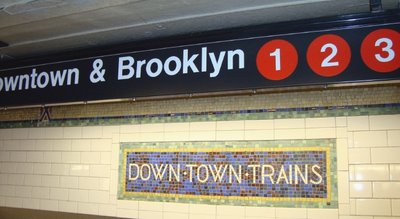 I saw Cadillac Records. It’s the story of Chess Records. A worthy subject! I was angry that I didn’t get to see it in a theater because I thought it would’ve played better with a superior sound system. But it actually turned out to be a good thing that I saw it at home.

I liked it, but in a bid for authenticity the actors who played Muddy Waters, Howlin’ Wolf and Little Walter—all key roles—affected thick southern sharecropper accents. I am so lilly white, so Ohio, so bloody Caucasian that I couldn’t understand a word they were saying! What a bunch of mumbly sons-of-guns! Mrs. Wife turned on the subtitles for me and it was smooth sailing after that. This is all very embarrassing. 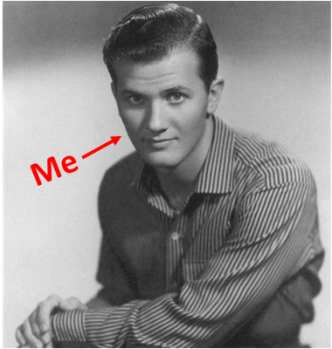 I noticed that Beyoncé, who played blues singing-junkie Etta James, was the only one who performed her songs from start to finish. All the other performers had song snippits. In clubs and studio scenes, they never seemed to sing to completion.

Then the credits rolled and I couldn’t help noticing that Beyoncé was the Executive Producer.

It’s her coin. She can do whatever she wants, I guess.