My gay friends are more interesting than my straight friends. They seem exotic and glamourous to me. They’re better dressers and become emotionally overwrought at a moment’s notice, which can be phenomenally entertaining. I have a lesbian friend across the hall, Cindy, and another next door, Hedy. I live in Harvey Fierstein’s version of Three’s Company. They invited me to a dinner party. They needed to borrow my table and chairs but I’d like to think they would’ve invited me nonetheless. It was me, Pete, five lesbians and one cute straight girl. Pete is a talented guitarist with a big afro who plays gigs with Cindy. They call him Linc, after the black cop from The Mod Squad, but not to his face. They were making fun of Pete and me, calling us breeders.

Most of them were vegetarians (of course). I thought the food would be bland but it was surprisingly satisfying. I had a few glasses of wine and got carried away, but just the right amount. I like when Pete laughs. It’s a hearty, full-throated laugh. They sat cute straight girl next to me. She dropped hints that she’s not seeing anyone and would occasionally rest her hand on my arm when making a point. I liked her but I’m reluctant. She’s Hedy’s close friend. What if we wind up in bed and I can’t deliver the goods or I freak out and perform my disappearing act (as usual)? Girls talk. I can picture all those lesbians exchanging knowing nods.

A few nights later Ellis had Clarance and me over for dinner. Again, I was the token straight in the room. Ellis is a terrific cook. The recipe called for mayonnaise and he didn’t have any so he made some. I didn’t know you could do that. I thought you had to buy at the supermarket.

Clarance was renting an apartment in the brownstone he owns to a woman who up and left for Tampa on short notice and still owing him money. Not long after, she called and asked him to be a reference for a mortgage application to buy a house. He said, “I fixed her. I told her ‘Of course you can use my name.’” When the bank called he told them she was chronically late with payment and still owes for back rent. Afterwards, she called and said, “Clarance, I thought we were friends!” He said, “We are, dear, but you still owe me money.”

Loony Marina Abramovic. I liked her a lot more before she wrote an autobiography. She grew up in a wealthy family right after the war. While folks around her were starving she enjoyed maids, theater and a grand lifestyle. Yet, in her autobio, she complaines of “…the tyranny of support.” After success she whined about “…changing planes so often, museum and gallery openings, endless receptions…” Boo-hoo.

“There are 72 objects on the table that one can use on me as desired. I am the object. During this time I take full responsibility.” Duration: 6 hours. 1974. Naples. 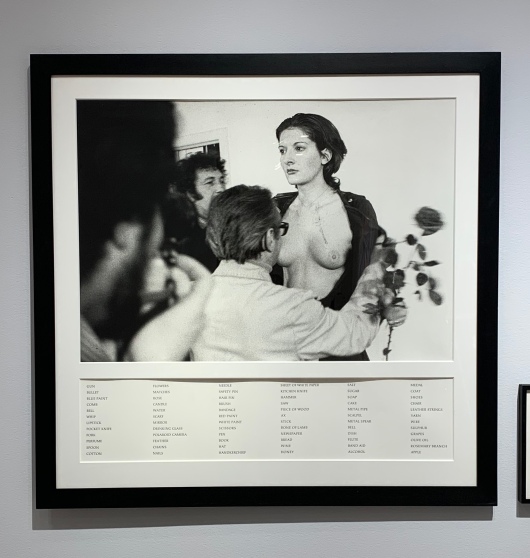 I’m destitute. I’m so broke and in desperate need of money I took a temp secretarial gig at Lehman Brothers. Answering seven phone lines isn’t doing much for my self-esteem. Is this all I’m capable of? I got home Friday and wept over feeling so hopeless and unemployable. Laura used to say I was either the most confident person she’d ever met or the greatest actor. It’s the latter. I miss her terribly.

Ann came over the next day and I was still a mess. We laid in bed and after pouring my misery out we went at each other like two Tasmanian devils in heat. She is equally adept at taking charge and being submissive. It’s a talent. I felt a little better after that. She’s leaving for Cambodia in three weeks to go ancient artifact looting—I mean shopping—to stock the gallery. I wish she would take me with her. I asked but she said it’s a business trip, otherwise, etc.

When she left she pressed a $100 bill into my hand and said I didn’t have to pay it back. I feigned like I couldn’t possibly accept it but of course I did. After she left I went across the hall to Cindy’s. Her house slippers look like oven mitts. We went to Two Boots for pizza and I paid with the money Ann gave me. $20 including tip. I spent $20 at the smelly Key Foods on Avenue A and paid my phone bill ($40). That leaves $20. Cindy is playing out on Wednesday night at the Knitting Factory and said I should bring Ann.

There was a notice in the lobby from a Law & Order location scout. They’re looking for apartments to shoot in. I took the notice down so no one else would see it and called right away. They pay $500.

I sat through orientation at Ernst & Young to be on their on-call list. It was dreadful. They covered the glorious history of Ernst & Young. Apparently, there’s a misconception in the public’s mind as to how the company’s name is pronounced, so they went around the room and made each of us say the name out loud. Humiliating. The Citibank orientation was more humane. They said I should get a beeper.

I sat in my window last night and watched firemen put out a tremendous fire across the street. There was so much smoke. I’m afraid of apartment fires. You never know what your knucklehead neighbors are up to.

I’ve been on Instagram for about nine weeks and here are a few things I’ve learned:

My bride and I went out Saturday night to see comedians John Mulaney and Pete Davidson. I enjoyed Mulaney but found Davidson vulgar and unfunny. In all fairness, we are not Davidson’s target audience. The same people who find him funny are the same folks who’d attend Coachella, which is something I’d never do.

They announced that cell phones would be locked in a Yonder pouch so the show couldn’t be recorded. The pouches are unlocked on your way out. We didn’t want to deal with all that so we left our phones at home. We sat at the dinner table and tried to remember the last time we left the house for a night out (or ANYWHERE) without our phones and we couldn’t. Initially, I was concerned that not having my phone might give me an anxiety attack but do you know what? Dinner + show – phone = emancipation. We didn’t miss it one bit. An uninterrupted dinner was a genuine pleasure.

After all these years, having kids finally pays off. I waited a long time for this day to come. 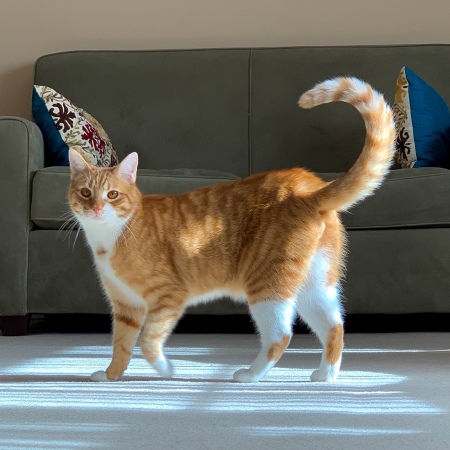 I took my 12-year old on a Chelsea gallery hop. The 17-year old is out of the game. She has a Saturday gig and a boyfriend now. There’s no room for gallery hops with Dad. Eventually, I’ll lose 12-year old too and be back to wandering around these galleries alone. I’m not hurt or insulted. It’s the nature of how things work.

I think she was a bit bored. I occasionally caught her standing in a corner staring at her phone instead of the art. I think she enjoyed the time spent with Dear Aul Da but I’m not sure how she feels about art. I either opened a world for them or turned them off to art permanently. It could go either way. But you have to make the introduction. What happens after that is out of my control. 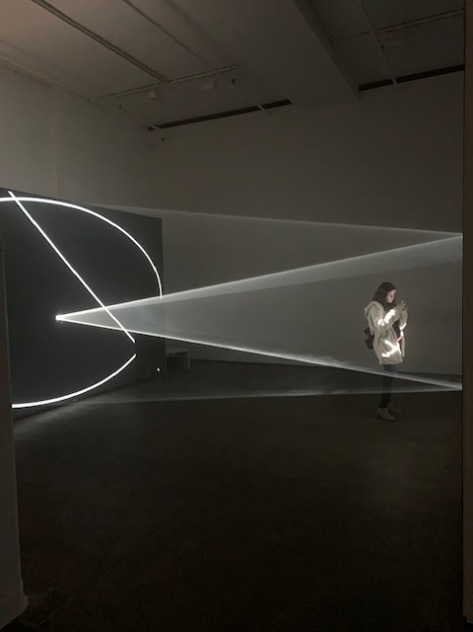 I’m like a parrot. I like shiny objects and light is my favorite medium. Light + mist is even better. 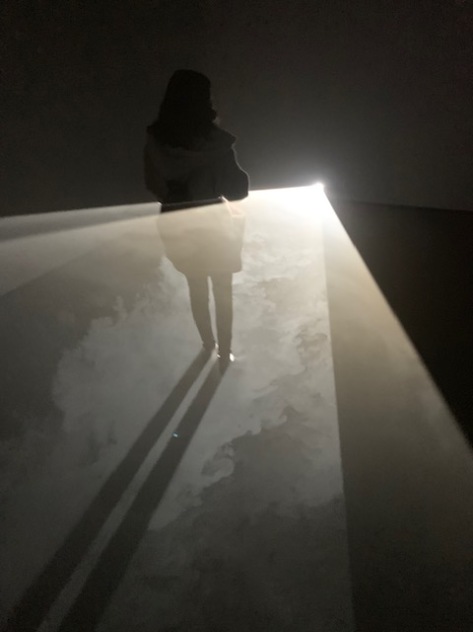 A young child ran into the light and I couldn’t resist a pic.

James Turrell is the grandmaster for me but this is a very fine example of McCall’s ‘solid light’ works. 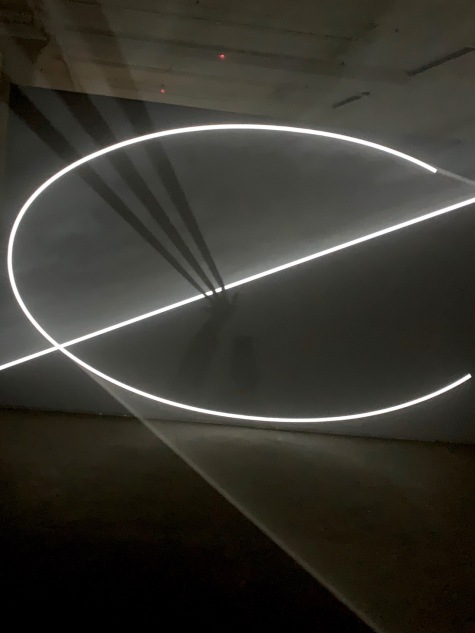 This room of shoe oddities tucked in the back of the Marlborough Gallery is Towards An End to Biological Perception by Genesis P-Orridge. Animal lovers beware.

My daughter didn’t spend any time looking at these. She found them disturbing, spun around on her heels and walked straight out, which I understand. But *I* liked them.

The larger part of the gallery is filled with Davina Semo’s large scale sculptures in All The World. Along the floor are heavy cubic bales that anchor chains linked to bells cast from bronze. 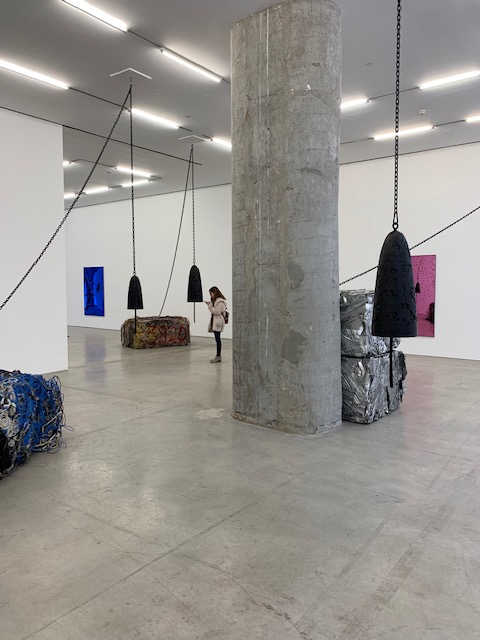 I didn’t want to get thrown out so I asked permission to ring the bells and they said it was OKAY. So you can imagine what that lead to. 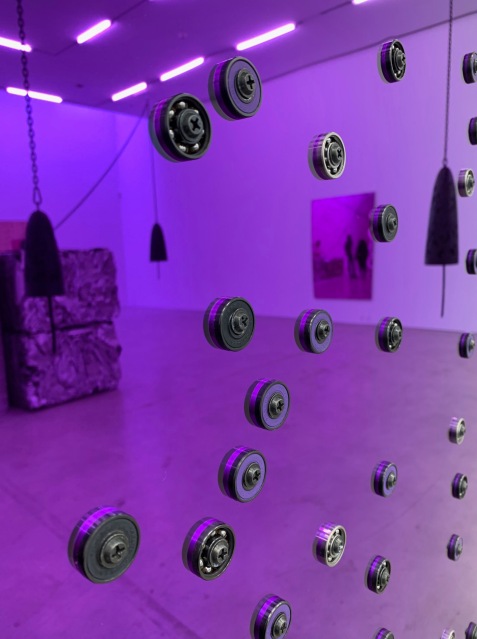 I was reading a review in ARTnews, which is something I rarely do. ARTnews sucks all the joy out of art. The reviewer said of the piece in question:

For an oeuvre that is so self-consciously synthetic, the overall experience offers a surprisingly potent meditation on attention, lifespans and mortality itself.

What does that even MEAN? I have a very base, visceral reaction to art. I look at it. Does it make me have a proper laugh (in the good or bad way)? Is it beautiful to behold? These are my criteria. It’s why I hate political art.

I’ve decide the world would be a better place with my photos in it (Ha. Just kidding. But only a little.) so I opened an Instagram account. Happy New Year, everyone. Onward through the fog.