I work with a lot of legal disclosure text so I’ve become hyper-sensitive to the fine print. I can’t help but to take note of the cautions that corporations post when pitching their products. Some of them are pretty amusing.

For instance, Nissan posted these helpful words during a recent commercial for their sporty Rogue. In it, three young, multi-racial, milt-gender, attractive (God, dare I say it?) hipsters are caught in a traffic jam and running late. Evasive action is taken by the pretty driver.

Because someone might not realize that a car flying through the air three stories off the ground is not real. After the car lands on the roof of a speeding train, they cut to the pretty driver as she flicks her hair, arches an eyebrow and smiles confidently. Easily done. The car speeds along and we are further cautioned: 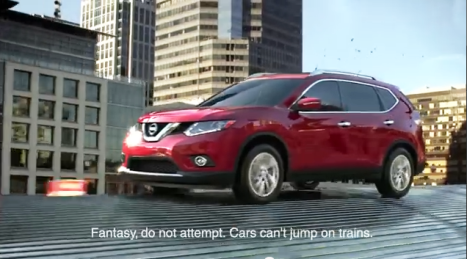 Do you know what this means, don’t you? This means that a gaggle of lawyers sat in a boardroom at TBWA/ChiatDay and decided that their commercial is so well-crafted and so convincing, that some idiot out there might actually buy a Rogue and try to jump onto the roof of a speeding train, which will only result in death and, worse, litigation.

Pharmaceutical warnings are the best. I recently saw an ad for Chantix, a drug that will help you stop smoking. The usual litany of nightmare side effects were listed, but along with the constipation, gas and/or vomiting, you might experience this:

Excuse me, but I WANT vivid, unusual and strange dreams! Who doesn’t?! I’m considering becoming addicted to tobacco so I can take Chantix and enjoy a riot of colorful dreams. Thank God for the Food and Drug Administration. Do you think your friends at Chantix would reveal any of this if it wasn’t mandated by law? No, brothers and sisters, they would not.

I was in lovely Cleveland visiting dear family right after Christmas and you’ll never guess who I was shooting craps with at the downtown casino. Santa Claus!

After a long night of delivering gifts to all the good little boys and girls–a trip that apparently causes Santa to shed a significant amount of weight–Santa likes to cut loose at the crap tables. Mrs. Clause was nowhere to be seen. Santa was busy chatting up the tiny box girl next to him who looked suspiciously elf-like. Santa was laying money on the center prop bets. An unwise strategy, as any student of the odds will tell you.

I am Mia! My hypnotic gaze will penetrate your soul and enslave you! I command you to toss this ball into the next room. When I return with it, you will toss it again. And again! And again! All afternoon long. 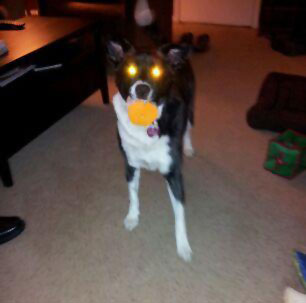 Walk into the kitchen, fitly human, open the cupboard and get out the doggie treats. Do it now, you worthless bag of meat.

Now, scratch my belly, pig. The power of Mia compels you!