Skip to primary content
Skip to secondary content
Here is the final in what turned out to be a culinary trilogy of home cooking in Cleveland.My grandmother immigrated from Calabria, Italy, to Cleveland when she was a young girl. Her mother taught her how to make marinara sauce the way her mother made it. My grandmother taught my mom how to make it and my mom taught my sister. My niece is next in line and she had better get on it and, more importantly, get it right.

I cannot provide the recipe because I don’t know it. It’s a mystery that’s been passed through the generations. I do know that you have to make it many, many times before you finally produce a successful batch.

I also know that it’s made the day before it’s to be served and allowed to sit overnight. I don’t know the science behind why that’s done but the end results can’t be described. I’m not a good enough wordsmith to tell you how good this stuff is.

It goes without saying that Italian sausage and meatballs are made with the sauce. They are a meal unto themselves.

In addition to sausage and meatballs, she throws in a few neck bones. I’ve been eating neck bones for most of my life and have never stopped to think of what animal that tender, sweet meat is from. I think it’s a cow but I suppose it could be a pig. I honestly don’t know. I don’t care. 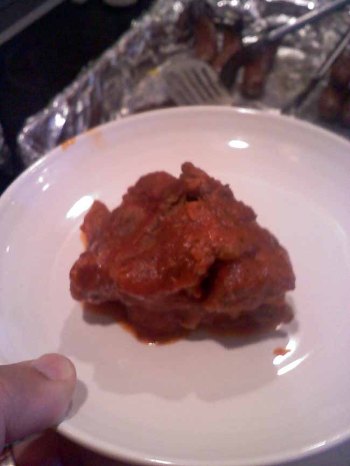 A little bit of Great Lakes lore for you.

Micro brewing is popular in Cleveland (as it is in most regions). The Great Lakes Brewing Co. makes a lovely Porter called Edmund Fitzgerald. It’s named in honor of the Great Lakes freighter Edmund Fitzgerald. In 1975, the ship sank in Lake Superior during a gale. It happened so quickly that a distress signal was never sent. She was just 17 miles from safe harbor. All 29 of her crew perished, with none of the bodies recovered.

When the wreckage was located, it was discovered that she broke in half. When I was in the Coast Guard, I remember reading the controversial investigation reports. There are some interesting theories about what would cause a ship that size to split in half but, to this day, they still don’t know.

This probably isn’t going to have as wide an appeal as his bar-b-que ribs, but bro-in-law also knows how to glamor a package of bratwurst. Bratwurst, for the (unfortunate) uninitiated, are a German sausage that contains either veal, beef or pork. Or it could be all three for all I know. I’m not entirely sure, nor do I have any interest in finding out.

You could slap ’em on a grill and that’d be fine, but do you know what’s really good? Poke each brat 4x with a fork and allow those puppies to simmer for about :45 minutes in concoction of beer, onions and garlic.

At this point they’re ready for the grill. Put them over a hot flame until the skin becomes crispy. I like mine to be just a bit blackened.

Some common cheeseburgers were grilled for those who have more pedestrian tastes. Believe it or not, there are people who would turn their noses up at a grilled bratwurst. Like a certain wife I know.

All you need to do is drape a little Gulden’s Spicy Brown mustard on and THAT’S IT. They don’t need sauerkraut, relish, ketchup or any other condiment. You’ll ruin it. You don’t want to do anything to mask the flavor of the sausage. A little leftover potato salad and cole slaw on the side is highly recommended.