The lovely and talented Jennie from Tip of My Tongue gave me a Versatile Blogger award. How nice is that!? Previously, the only accolade I’ve received was the WordPress King of Typos and Misplaced Commas Award, which might sound awful, but it came with an honorarium.

As part of my thanks/acceptance, I’m required to reveal seven random facts about myself. Unfortunately, the REALLY interesting tidbits are not fit for public consumption. You’ll have to be content with these.

1. I saved a life. Actually, I saved several. I was on a Coast Guard search and rescue team. I drove the boat. When you throw a line to a boat that’s taking on water and transfer the passengers over, they look at you like you’re God. We were, literally, the difference between life and death. It’s pretty intoxicating stuff, especially when you’re just a kid. I haven’t done anything as gratifying before or since. The investment banking weasels I worked for after the Coast Guard are paid many multiples more, but they’re not fit to tie the shoes of the men and women in the Coast Guard.

2. I don’t recall having one conversation with my father. Not one! That dude looked right through me like I was a wisp of steam that somehow got into the dining room. He was a tragic figure, but not in the grand Shakespearian tradition of Hamlet or Edward IV. He was a mama’s boy who felt put upon by the world. His favorite song was (not kidding) Burt Bacharach’s Raindrops Keep Falling on My Head. Boo-hoo-hoo. Poor me.

3. Many, many years ago, I attended a picnic in Bruce Springsteen’s backyard. It was at his horse farm in the bucolic New Jersey countryside in late September. A beautiful early Autumn day. Blue skies and a cool breeze. There was tons of food and stuff for the kids to do. There was a demonstration of trick horseback riding. Near where a field started, a stage was set up. Not a giant one like in a stadium. It was just four or five feet off the ground. The kind you’d see at an outdoor community theater production. Some members of the E Street Band were there along with other sundry New Jersey musicians. After we all stuffed ourselves silly with bar-b-cue and beer, they climbed on stage and played for about three hours. None of his songs. They were all from the Motown catalog and classics from the 60’s with a few chestnuts from the 50’s and 70’s thrown in. Different musicians would hop on and off the stage but Springsteen never left. Fred Schneider of the B-52’s sang a rousing version of Sam the Sham & Pharaohs’ Woolly Bully. I talked to him afterwards and he said he had no idea what the lyrics were and was just making it up as he went along. As dusk settled, a gigantic, golden, harvest moon came up low on the horizon. Springsteen looked over, saw it, and launched into Creedence Clearwater Revival’s Bad Moon Rising. It’s one of my top five best days ever. Stuff like this isn’t a part of my life. I’m just regular.

4. When My Bride and I announced our engagement to her parents, her mother wept. And they were not tears of joy.

5. I’m a small-time rare book dealer. I’ll buy a book that I feel is being sold under-value with the intention of reselling it either at an auction or on eBay. The problem is that once I’m holding it in my hands, I can’t bear to part with it. That’s why I can’t do it for a living.

6. I didn’t lose my virginity until just two months shy of my 20th birthday. I had plenty of opportunities but I never wanted to be that close to anyone. Also, I didn’t want to become dependent on something that could be taken away from me as easily as it was given. Pretty smart, right?

7. The most important relationship in my life has been…ready?…New York City! The most heartfelt and gratifying relationship is with My Bride and Daughters. But, let’s face it, if it weren’t for New York City, for better or worse, I wouldn’t be the man I am today. I wouldn’t be typing these words. It molded me. And make no mistake—it was a real relationship with highs and lows and arguments and longing. I got mad once, walked out on her and had an 18-month affair with Phoenix, Arizona, but I came running back begging. She took me in, thank God. What was I thinking? 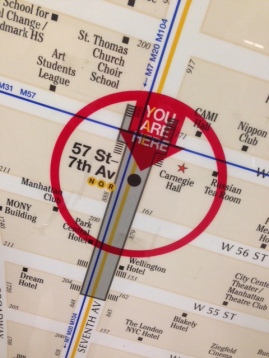