On September 10, 2001, I was working in the graphics department of an asset management firm located in midtown Manhattan. My graphics colleague from the Atlanta office, Jose, was in town for marketing and branding strategy meetings.

As he left the office that evening, he told me about his plans to visit the observation deck of the World Trade Center the next morning before coming to work. Jose was an architecture buff. He was thrilled at the opportunity to see Manhattan from such a rare perspective. The weather forecast was for bright, blue skies.

The next morning, at 8:46 a.m., the first plane flew into the North Tower.

At 9:03 a.m., the second plane hit the South Tower. The tower with the observation deck.

Our offices were on a high floor on 6th Avenue and 46th Street. The employees gathered in the main conference room, which had sweeping, unobstructed views of the southern tip of Manhattan. We watched in stunned silence as one tower fell. Then the other.

It would be up to our manager to contact Jose’s family in Atlanta to tell them of the tragic misfortune. He was a young guy. Really bright. And so happy to be visititing New York.

The hotel maid had drawn the blackout blinds—something he never does himself, preferring to rise with the sun. When his alarm went off at 6:00 a.m. the room was dark. He was delirious from being woken from a sound sleep. He thought he’d set his alarm incorrectly and that it was still the middle of the night, so he went back to sleep.

While brushing his teeth and cursing himself for having missed the chance to visit the observation deck, a special bulletin came on the TV. He sat in his hotel room, transfixed to the TV, not realizing we all thought he’d perished.

I hadn’t spoken to Jose in many years. I reached out to him this past weekend just to confirm I didn’t imagine this happening. It’s all true. He left graphic design and now works designing medical devices at M.I.T.

I saw Springsteen perform earlier this year and sent a couple concert pics to my pal, Sharon Florin, an artist who specializes in New York City architecture and is a yuge Springsteen fan. She was inspired and made two fetching oil paintings based on the photos. That’s my photo on the left and her interpretation on the right.

I like the paintings better. The photos look too stark. Too ‘real’. I prefer the implied blur of the paint.

Yesterday was our 15th wedding anniversary. That’s right. Our anniversary is 9/11. Thanks, terrorists, for fucking-up our special day. Oh…AND my city. When we got married, I thought the confluence of numbers–9/11/99–was a fortuitous thing.

We didn’t get married on THE 9/11. That’s how we spent our second anniversary. We were both working in Midtown Manhattan and living on the Lower East Side. All hell broke loose and we had to walk home. My Bride was seven months pregnant. She was wearing heels that weren’t suitable for a 45-block, four-avenue walk so we stopped into the Duane Reade and bought a pair of plastic flats. It took all day to get home because we had to stop for frequent rests. By the time we got home her feet looked like pieces of raw meat. I remember it being really pretty outside. Azure sky and cool temps. 100% clarity. The focus was sharp.

The transit system was shut down and the avenues were choked with pedestrians. It’s the first (and only) time I’ve seen New Yorkers inconvenienced and not complain about it. A military demarcation line was established south of Houston St. There was a gauntlet of armor personnel carriers and very large guns. In order to get to our apartment we had to show ID. That went on for three weeks. Once inside our apartment, we had to shut the windows because the air stunk like a combination of an electrical fire and burnt hair. The Trade Center was (had been) just a mile away.

We moved out of the city four months later. Our move had nothing to do with the attack. At that time, Avenue B was no place to raise a little girl. The wheels for the move had already been set in motion. We had bid on a house and were disembarking for the suburbs. I felt awful about leaving. It felt like we were abandoning the city in her time of need.

We didn’t celebrate our anniversary for the next four years. It didn’t feel right. But then we got back on our feet and decided to reclaim what was rightfully ours–just like my shining citadel on the hill did.

15 years is pretty good run. A lot of people don’t make it to 15 months. In all that time, I’ve never once thought of bailing out. Not once! I’m serious! Isn’t that miraculous? 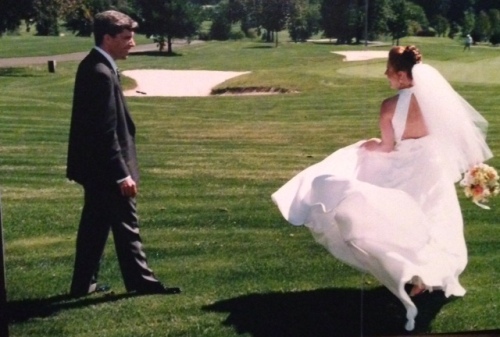 Look how black my hair used to be. So sad.

I had a brief chat in Aussa’s comment section about my Go Bag. She’d never heard of one. Maybe they only have them in New York? Can anyone confirm that? I’ll bet Guap knows what they are.

Go Bags came around after 9/11. As part of the on-boarding process when you get a corporate job, after you get your building ID, sign a bunch of forms and are shown where the restroom and coffee break rooms are, you are given a Go Bag to keep at your desk. They’re survival kits to have on hand in case—oh, I don’t know—in case a Boeing 767 slams into your building a dozen floors below you and you’re trapped.

It’s a bright red (the better to spot you in the rubble with, my dear) nylon backpack with the company logo on it. (Blurred here to hide the address of where Guap and I work. We two handsome devils don’t need stalkers. We have busy jobs. And wives.)

Inside, you’ll find everything you need to improve the odds of your survival (assuming the whole deal hasn’t collapsed onto yo ass). 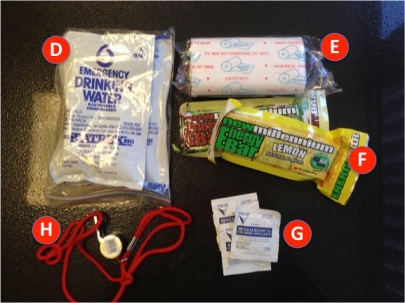 Thankfully, I’ve never had to employ any of this stuff. The energy bars are a few years old and I’ve never been THAT hungry. I got a Go Bag at my last job and I took the glow sticks home and gave them to my daughters to play with. They’re so fun! I wish I’d had glow sticks when I was going through my narcotic phase.

This is indirectly related to the subject matter at hand. Did you guys see this in the paper?

“Taliban assailants apparently thought they were attacking an unprotected day care center. But they mistakenly burst into the compound next door, where an American government contractor’s employees were heavily armed and ready. All five Taliban attackers were killed, including one who committed suicide.”

What cowards. Their mission was to shoot children. A death sentence is exactly what they deserved. That part of the world has always been so broken. What causes such long-term societal stagnation? They’re afraid of technology. Afraid of women. Afraid of sex. Afraid of artistic expression. An awful, awful place. Who are we (the West) to think we could change it?

Last weekend there was a Veggie Pride Parade in the Village. It started down on Gansevoort Street and wound its way north to Union Square.

Typically, I don’t bemoan dirty old New York. For the most part, I prefer its present incarnation. But this place used to be so bad ass. It was Travis Bickle and Julian’s pool hall on 14th Street. When the subway would pass over a dead piece of track, all the lights would flicker and go out. You never knew what would be standing in front of you when they came back on. I spent countless delightful hours watching from a safe distance as three-card monte grifters hustled tourists in Times Square. Now this place is all hedge fund douche bags and veggie pride parades.

The Empire State Building from Bryant Park. 8:45 p.m., April 2, 2014. Right after I saw this guy at the New York Public Library give a talk about magic: 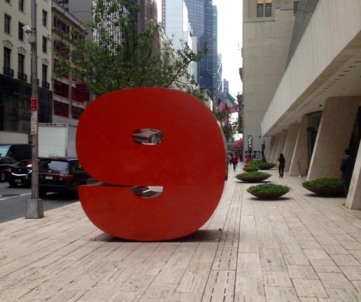 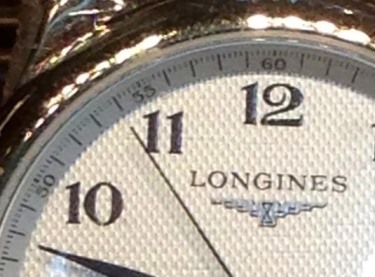 Not all anniversaries today are the weepy kind. “I do” happened for us 14 years ago. Not such a bad ride, right baby? You make me a better man. Okay. As Bukowski advised, scramble two.

Adieu, summer, adieu. I started the season off with a short video clip of my daughter expertly wrangling a fistful of fireflies. I’ll use the same motif and bookend the season with her on a New Jersey beach.